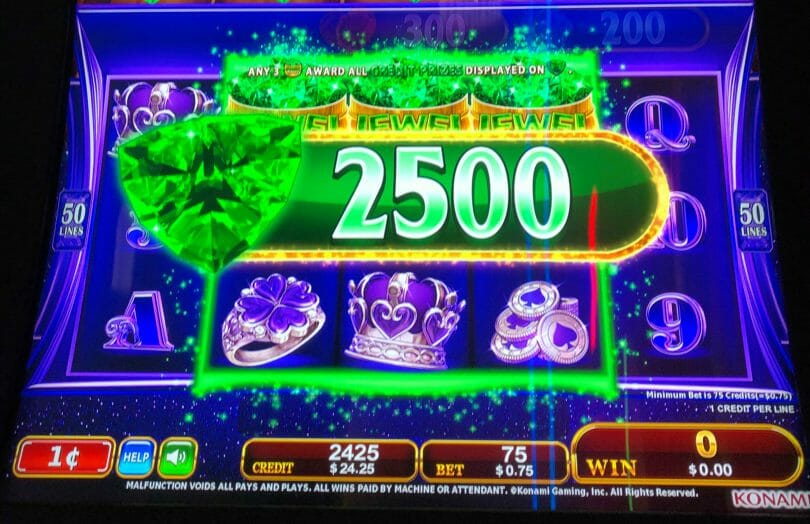 When you play on a slot machine, you may sometimes see a meter with “Credits” on it. Why does a slot machine display credits as opposed to, say, your cash balance? It’s designed to make the math easier.

Credits takes the current amount that’s in the machine and does the math of how many betting units you have based on the denomination. For instance, if you put a $100 bill into a quarters machine, it will display 400 credits. If you play a machine that’s 5 lines and 1 credit per line, that’s 5 credits, or $1.25, per spin.

For some denominations, like pennies or dollars, it can be a very simple issue of knowing how much cash you have, as well as how many credits you have based on the denomination. But when you’re playing nickels, dimes, quarters and so on, it can get potentially confusing when you need to do the math in your head of how many spins your cash will allow, for instnace.

Many modern slot machines, although not all, will let you switch between the two. Some will show both, such as credits with the dollar amount right above it on some Bally machines, for instance. Some will count up in credits but let you see your balance in cash.

Older machines, particularly many of the older mechanical reel machines, will generally just show you the credits in prominence, although many (like the classic IGT machines) will list the cash balance in tiny print elsewhere. Regulations in states like Nevada require a credits meter, a likely contributor to why credits was at one point so prominent.

As such, if you’re playing a denomination outside pennies or dollars, be sure to pay attention to how it’s tracking your wins and wagers, so you can best follow along. It’s not uncommon for a player to get confused while playing, especially if they’re changing denominations a lot on a multi-denomination machine, and the wins (and wagers) end up being bigger than they expect.