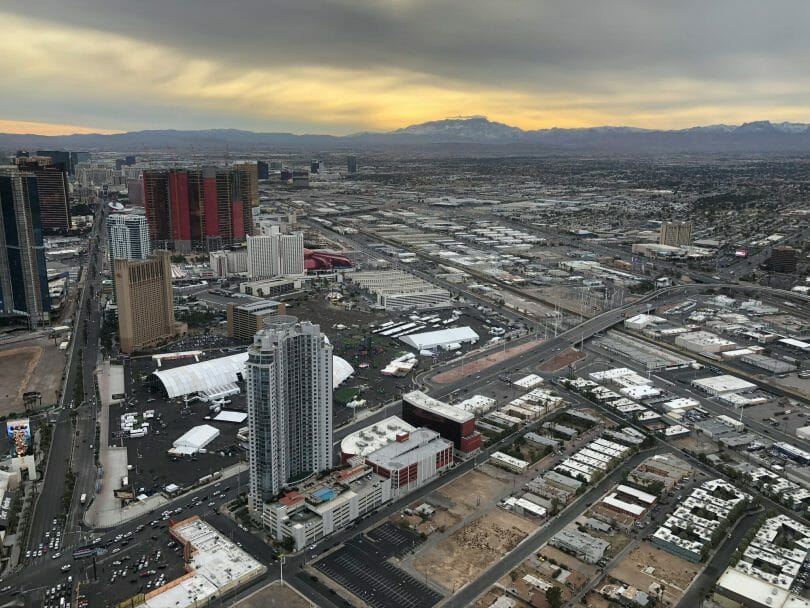 The Strat is way up on the northern end of the Las Vegas strip, but it’s unusual history has led to it having a few things other casinos don’t have, such as the highest observation tower (complete with thrill rides built right up on top).

Today, as a modern property, it actually offers quite a bit, as long as you’re willing to be further away from the center of everything. And as a more budget-friendly property, if you’re looking for something more upscale, you can find better options nearby.

Let’s take a look at what the Strat has to offer!

The 80,000 square foot casino floor isn’t the largest in Las Vegas, but it still has plenty to play. When I visited for my first time in 2019, carpet was going through a replacement phase, so some machines weren’t in place at the time, but the casino today features around 750 slots, a mix of denominations, and a mix of old and new games.

The table game situation at the Strat is pretty modern, with a relatively new table games area installed in the past couple of years. They feature both Craps and Crapless Craps with 10x odds. Blackjack, Roulette, and various Poker variations are available too. They note roughly 40 tables available.

The Strat has a few different room types, which also includes some relatively new renovations and some older rooms. In total there’s four different room types, each available in either one king or two queen types. Their pricing tends to be on the affordable side, so that gives visitors a decent budget option.

Each room type is in the same general room size (320-340 square feet), with most offering a desk for working space and a separate seating area.

The Strat is part of the True Rewards program, which means it’s linked to a lot of other Vegas properties… and one, Rocky Gap, in Maryland. One thing that’s good about casino properties and True Rewards is the redemption rates are more generous, and the earning rate on dining spend is also drastically more generous.

At the Strat you earn 15 points per dollar on dining, which can add up quite quickly, and the redemption rate is 500 points/$1 for casino free play, 300 points/$1 for retail comps and 1000 points/$1 for cash back. You effectively earn points five times faster than Caesars Rewards, so that can be quite beneficial for comps.

The bulk of the dining choices are pretty affordable and casual, but there’s some impressive choices too, including the option to eat at Top of the World, a rotating restaurant at the top of the observation tower. Top of the World has both a dress code and a food minimum, so plan ahead if you’re looking for something more upscale.

If a formal dinner isn’t your think, but you still are hungry while way up in the observation tower, they have a snack bar available on the 108th floor too.

Their Starbucks is open 24/7, allowing for those who are staying up late to get their caffeine or a snack. The only other thing close to a 24 hour option right now is the Strat Cafe, which closes weeknights but is open 24/7 on the weekends.

The Strat’s retail level includes a couple of other mall standards like McDonald’s and Fat Tuesdays, above and beyond what the Strat itself advertises as its core options on the website.

This casino deserves this category on its own because along with the Observation Deck are thrill rides attached at the top of the tower as well. That alone makes this property pretty unique, and will certainly offer some thrills for those looking for them.

They also have a pretty solid line-up of shows running at any given time, and the line-up evolves, so if you’re interested in magic, mentalism, musicians, and other spectacles, you’ll likely find it here.

The biggest challenge with this property is it’s so far north on the strip. Slowly, over time, other properties are starting to fill in that end of the strip, but it’s been a long slog, and even now it’s still so far away from where much of the activity takes place that you should plan to be away from a lot of the action unless you plan to take some form of transit or walk a long way to get to center strip.

It’s sort of close, but not really, to Sahara and Circus Circus. Sahara is the final stop of the Las Vegas Monorail, which means from there you can get down to the main portion of the strip a bit quicker, but you might just find it easier to grab The Deuce or an Uber.