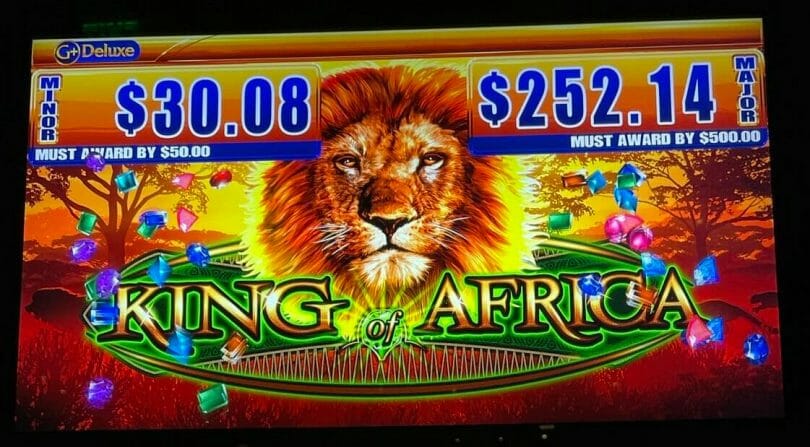 There are some slot machines that really maintain a robust fan base year after year. King of Africa (as well as its clone, Mystical Unicorn), falls into that category. In many casinos they’re among the last old WMS machines to survive on the floor, in part because they continue to get played.

In locations like Live! Casino Maryland, they continue to maintain full banks of the game, and I rarely see them empty when I’ve been there. Mohegan Sun had a few of them that held on long after many of the other machines in the same cabinet were removed.

The game’s popularity is such that it was among the early games on the remake list when Light and Wonder (formerly Scientific Games) finally got around to reissuing some of their G+ Deluxe games.

What makes these games so attractive? They’re volatile, but they have some serious potential. As I shared when I posted about Slotman777, who plays these games nearly exclusively, the 500x prize for a full screen is a dream scenario players chase, but just getting stacks of the top symbol can be lucrative.

The top symbol pays starting at two across for 2 credits per line times the line bet, and so getting two full columns of lions up front can set things off right.

Get to the five of a kind scenario, and it leaps to 500 credits times your line bet, which is how you get to the potential for a 500x line hit win. Wilds can appear to help fill in gaps, when the full row of lions can’t appear, which is certainly helpful too.

The chase for the long animal stacks remains the primary objective in the bonus, along with retriggers that can give more spins for more chances to line them all up. There is lions that replace symbols on parts of the reels in the free spins, effectively setting up an increased chance of getting a big win, so that’s part of the volatility of the game in getting those bonuses.

Overall, it’s a tough game, but there’s real potential in those pays, which is what keeps players playing all these years later.

RandomSlots has a good session, featuring a bonus with an over 100x line hit during it, and the pay tables to check out here:

Slotman777 shows off a full screen win on a low bet at around the 5:00 mark on this video: