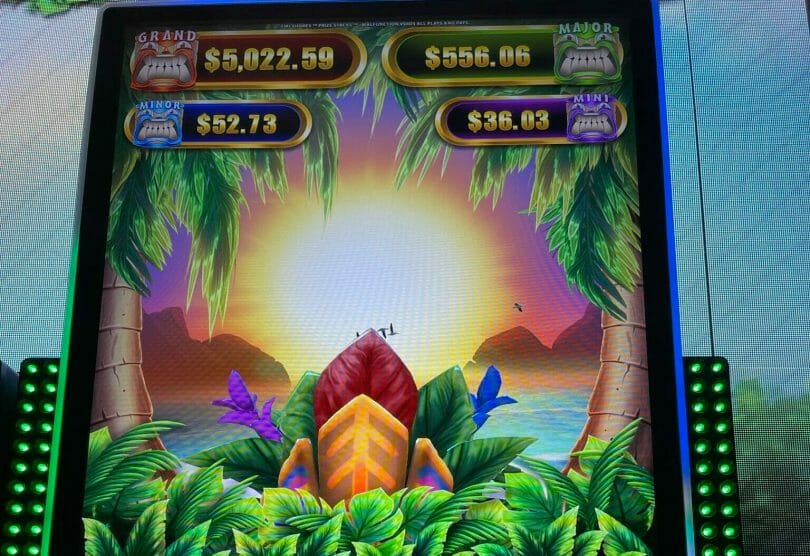 AGS seems to have been hitting its stride recently in developing games with a good balance of features and gameplay. Their artwork has been evolving quickly too. A great example of this is the Prize Stacks series, just released.

I got to play the Tiki Shores version recently at Treasure Island, and I walked away impressed.

The game has 80 credit bet increments, which may sound high for lower betters but the array of features and bonuses for the game definitely makes use of the money being invested.

The game has a regularly occurring scenario of growing reels, which can open up the opportunity for bigger wins as an all ways pays game. They can grow up to 7 rows tall.

There is also a prize collection feature when the tiki appears with a number in its mouth on reel 5. Any other tikis that appear will get credit prizes. But if you have a stack of tikis, you get awarded 1x for the lowest tiki on the totem pole, 2x for the one above it, 3x for the one above that, etc. So if you have a stack of four Tikis, that would award a total of 10x of the prize in the tiki’s mouth on reel 5.

The tikis are also how you get progressives. If you catch a tiki that has a progressive on it, you will win a credit prize and the progressive.

Three bonus symbols trigger a seven spin free bonus where the reels grow by a row each spin until they hit their maximum height, staying there until the bonus is over, and opening up the chances for big tiki stacks with prizes. If the reels were already grown, they will start at that size. Retriggers are possible and get five extra spins.

The game is a nice balance of features, bonuses and line hits, and for a high volatility company traditionally like AGS, you can see the potential in the game but it doesn’t feel as tough as some of their other titles.

Brian Christopher played it both at the beginning and the end of his live stream:

Slotaholic also played it in a live stream starting at 18:50: