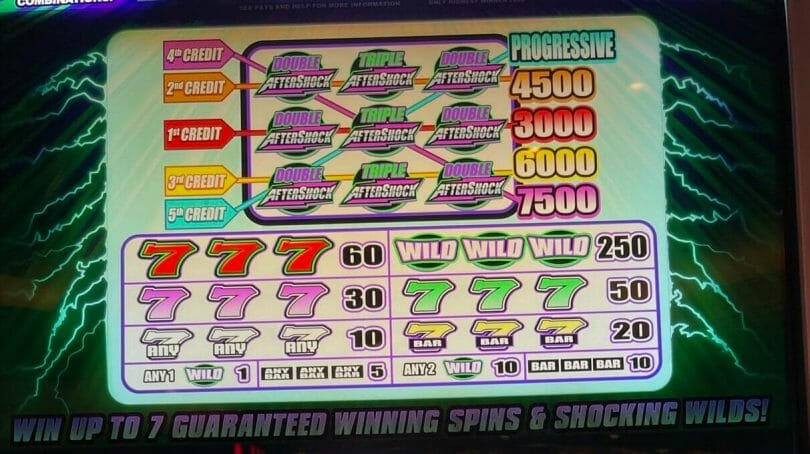 During my recent Vegas trip I’ve had the opportunity to play one of my favorite more modern mechanical reel games, Aftershock.

The game is a three mechanical reel game, generally five lines. I’ve seen it at various higher denomination formats and I usually play it at quarters, making it a max bet of $1.25 a spin.

The game spins really fast; you cycle through wagers quite quickly. The game pays for mixed sevens and bars, helpful as that tends to make the game less volatile.

In lieu of a bonus, the game has a feature, the Aftershock feature, which guarantees winning spins, at least two of them but it can go up to seven spins in all.

In a weird quirk, when you play the games in New Jersey, it shows you how many winning spins you have left, whereas in other markets like Las Vegas, it doesn’t.

During the feature, if you get a double or triple Aftershock wild, it will stick around for any further winning spins, and bounce around the reels until it locks into place. Having them around of course increases the chances of getting one of the big line pays, when you line up the Double/Triple/Double Aftershock symbols on a winning pay line.

The feature comes pretty often, which also mean it’s not going to pay a ton, but it certainly can deliver. Three wilds on a payline pays 250 (plus any extra leftovers for the wilds being on other lines too).

For those looking for a game with good play time and decent potential, you can’t go wrong with a game like this one. And with Aftershock being somewhat newer than other mechanical reel type machines, it’s likely to still be around on many casino floors that got them at the time. I played this one at Park MGM, but have seen it at other casinos in the past year, so it’s definitely out there.