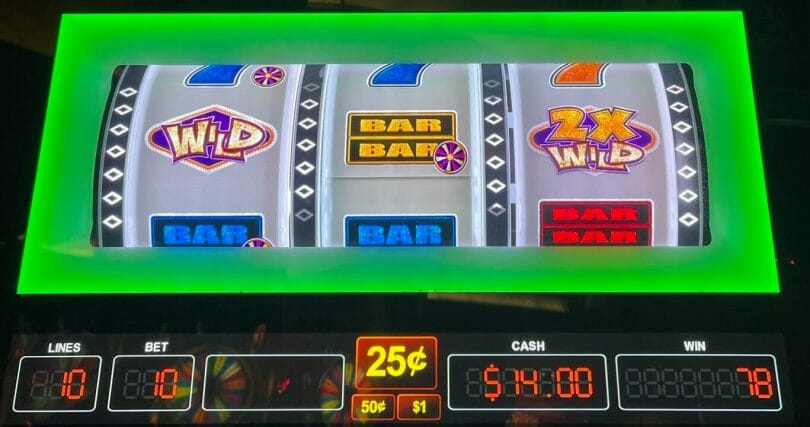 I’ve talked a lot about bet inflation on slots, that the bet of slots have slowly worked their way up over time. While this has been most noticeable on video reel slots, it’s also taken place on mechanical reel slots.

My article just yesterday on Elvis Presley in Viva Las Vegas is a good example of this. The Elvis mechanical reel game that preceded it was a 5 line game, whereas this one is a 10 line game. So presuming the same denomination, the cost to bet all lines and be eligible for everything is now double.

Another recent example is Double Top Dollar, found on the DiamondRS cabinet, which has also featured other games recently coming out like Double Gold Pinball. In both examples, the games require 10 credits to be eligible for everything, which is well up from 2 or 3 credits on these games historically have required to be eligible.

If there’s a bright side, many times these games tend to be multi-denomination, and in some cases the range of denominations might open up accessibility to more players. 10 credits at quarters isn’t far off from the 2-3 credits at $1 denomination, for instance.

One player who commented on my article about the new mechanical reel cabinets raised a concern that casinos might lower the payback on the new machines over the old ones. While that might be a possibility, especially if it’s replacing a really old machine that had much more limited payback possibilities, the fact that these games can spur 2-3x coin-in per spin likely offsets that more than enough that they probably won’t have to do anything different other than put the machine out there.

But ultimately, many of these new machines and the changes are because players are showing an affinity for mechanical reels with more lines. Everi practically owned the mechanical reel top slots charts for a long time with their 9-line mechanical reel formats, which has encouraged other manufacturers to work on 9-line or 10-line offerings of their own.

So in some ways the bet inflation found here is because we as players said we’re comfortable with it, and the manufacturers are giving us what we’ve indicated we’ve wanted. Whether this new wave of games proves as popular remains to be seen, but they’re coming in enough volume that we’ll see how players react as they hit the floors.