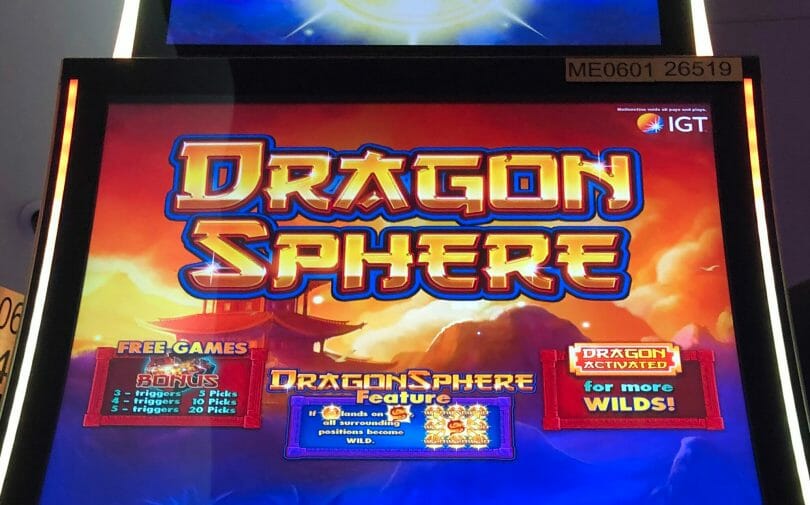 Game: Dragon Sphere
Manufacturer: IGT
Advantage play potential: Medium
What Makes it Special: Like Ocean Magic, bubbles are wild, but landing atop an dragon symbol makes a lot more wilds appear. Bubbles hang around until they’ve moved off the screen, even if a player cashes out. More bet levels than Ocean Magic make it a better game to watch.

IGT tends to make clones or near clones of many of their games, including the persistent state reel games, and Ocean Magic is no exception. Dragon Sphere carries over the same game play and bonus of Ocean Magic, but has one or two differences to it that makes it the slightly better Advantage Play option of the two.

Like Ocean Magic, Dragon Sphere is a 5×4 reel set with 50 lines. On any spin spheres can be added, although unlike Ocean Magic they float top to bottom vs. the other way around. For larger additions, instead of a tooting horn, a dragon will come down and add spheres to the reels. Spheres serve as wild spaces while they’re on the reels.

If a dragon symbol lands on the same space a sphere is floating, it makes all the adjacent spaces, including diagonally, wild as well, which could mean a 3×3 block of wild spaces on the reels, which can lead to some solid wins. If you line up multiple spheres with multiple dragons, it can get even better from there.

One of the biggest differences between Ocean Magic and Dragon Sphere is the latter has 5 bet levels vs. Ocean Magic’s three. Like its sister game, this one has the option to double your bet and activate the dragon for more frequent spheres to be added to the reels.

The free spin bonus is also the same – based on the number of triggering bonus symbols, you are given picks which can contain free spins or more picks.

Like Ocean Magic, it’s about the number of spheresand placement. You need to flip the script mentally – higher on the screen, and to the left, is now better. The more spheres on screen overall, the better, since they can line up with the dragon symbols to expose a lot of wild spaces. There’s 10 bet levels to check instead of 6, which offers both additional opportunities and opportunities at a higher bet level/value than Ocean Magic can achieve.

As such, this game might be worth checking before Ocean Magic as there may be more left behind opportunities, and larger win opportunities at the higher bet levels.

As usual, RandomSlots has screen shots of the pay table, as well as some live game play, of Dragon Sphere: