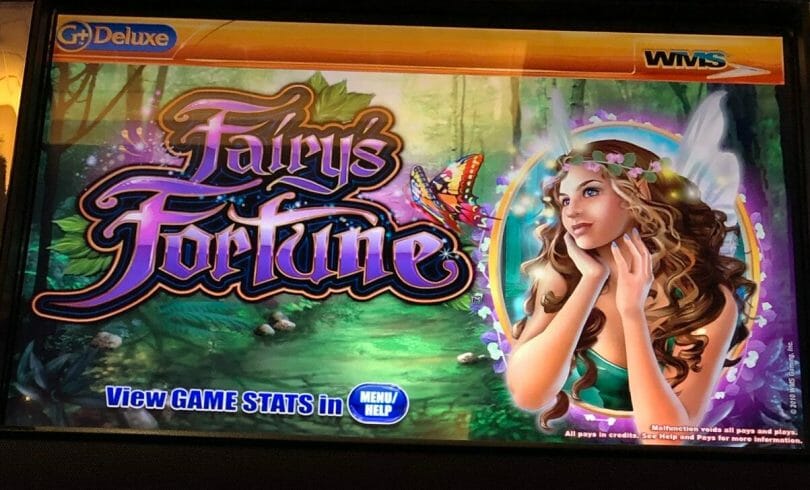 Earlier in my gambling history, I was pretty fond of a WMS G+ Deluxe game, Sea Tales. I later learned of a clone, Winter Wolf, and eventually thanks to mobile social casinos, became aware of Fairy’s Fortune, a second clone.

The latter two, ironically, I see much more often now than the first, which was a go-to at one of my home casinos years ago. Fairy’s Fortune in particular I’ve given some love as part of my visits to Live! Casino Maryland, which has had the game.

The big selling point of this particular game is the ability to upgrade five of a kinds. You get paid for the original, and then it cycles through upgraded symbols until it stops on one. There’s usually some really good upside potential to these upgrades so they tend to be quite exciting when they occur.

Added to the excitement of the five of a kind upgrade is the fact that there are a pretty generous number of wild symbols that are scattered throughout the reels that can boost the upgrade, or that the new symbols can line up with other symbols already on the board.

On the last reel, there is also a 2x wild symbol that can appear, further bumping up the pays, and especially on upgrades.

The free spins is where things can get amped up quite quickly. For one, you can get 15 free spins for 3 bonus symbols, a generous number, and you get more for more symbols. I had a 25 free spin bonus for four symbols during recent play.

All wins are doubled in the bonus, which helps build up some value fast, and this includes the five of a kind upgrades. Plus that 2x wild in the last reel is still around, further amping the multiplication up if you line things up just right. You do not need many symbols to rack up good wins – the above was two five of a kinds for $90 – one $30, one 2x for $60 – on a 40 cent bet, for example.

As such, like many of the G+ Deluxe games, the game and its clones bring a lot of potential to the table, and could lead to some stellar outcomes if you play things just right.