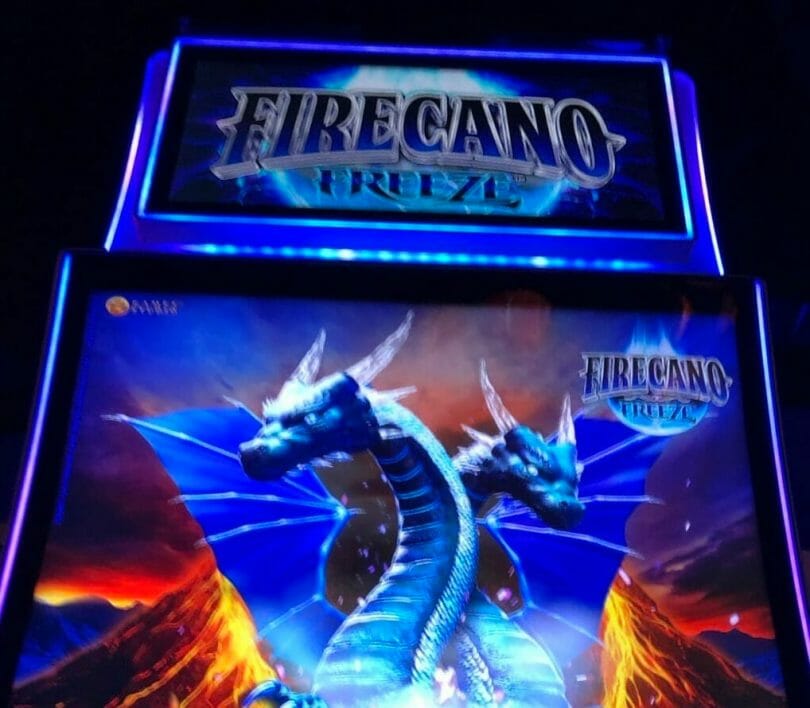 With Firecano Freeze Aristocrat is showcasing a concept that has a strong familiarity for fans of IGT’s Ocean Magic.

Game: Firecano Freeze
Manufacturer: Aristocrat
Advantage play potential: Medium
What Makes it Special: Fireballs are wild, and can be added on any spin. Fireballs landing on top of fireballs generate an up to 3×3 wild section on the reels.

IGT has developed a reputation in recent years of offering a lot of games with a persistent state mechanic, opening the door to tripping across scenarios that could be good for a player when sitting down. Other slot developers have been following suit.

It stands to reason that some of those games will have a strong correlation with one of IGT’s successful concepts, and with Firecano Freeze Aristocrat is showcasing a concept that has a strong familiarity for fans of Ocean Magic, with wild fireballs in this case, vs. bubbles, and the chance to have those fireballs explode into 3×3 zones of wilds when one lands atop another.

Sound familiar? It should, but the bonus round goes off in different directions, offering something a bit different at that point. Let’s take a look at Firecano Freeze and what it brings to the casino floor.

Firecano Freeze is a 5×4 reel set game, just like Ocean Magic, but only features 30 paylines, vs. the 50 on the IGT game. In addition, whereas Ocean Magic lets you select between regular and Bubble Boost, this game has its equivalent feature, Frenzy, a standard feature, meaning 100 credit bet levels.

Each bet level has its own set of persistent state reels, which stay put if a player cashes out or changes bets. If Wild fireballs are left on the screen, they will stay put for the next player to activate that same bet level.

If a Wild fireball lands on a wild fireball that already exists on the the board, it will explode, causing more wilds to generate around the space in all directions, even diagonally.

The end result, if it lands in the right spot, is a 3×3 clump of wild symbols. Land just right and you can get a decent line hit in the base game from them.

The Frenzy bet adds two potential Frenzy features. The first is the Wild Fireballs Frenzy feature, which can occur on any bought game.

Unlike random wild fireballs being added at the beginning of a spin, you get an indicator that this will add them at the conclusion of the spin, and then 5-10 wild fireballs are added to the reels.

These work just like any wild fireballs added – hit another existing wild fireball for the 3×3 clump of wilds, and each game they’ll stick around and move up a space on the reels until they fall off at the top.

When triggered, 7 free games are awarded. The free games will commence with up to 3 wild reels at the start.

The Wild Fireballs Bonus can occur on any free spin. They work just like the base game version, with the exception that if a fireball lands on another fireball, it works like a retrigger with three additional free games awarded.

After each free spin, one of the following can happen:

With the ability for multiple retriggers and taller reels, there’s a value to a longer bonus here, so that’s where the potential lies for the bonus.

With wild fireballs being persistent at every bet level, they’re what to look for. The value will come out of:

Because a fireball can cause another to explode, in the example I shared earlier in this article, a third reel fireball can have more value than, say, reel 5 as reel 5 you’ll lose the ones to the right as being off the reel set. By comparison, reel 1 would get you some reel 2 wilds and guaranteed line hits if one exploded.

You can check each bet level to see what’s stuck around, and you know how many spins it will take to clear them out, so it’s a known cost to work through it if you find it. But it also limits the value since you only have a few spins per bet level. Of course, find the right combo on good sized bets and it could be a good reward.

RandomSlots comes through, as always, with a video that features pay tables and a bonus:

Diana Evoni played Firecano Freeze in this video starting at about 5:25:

And here’s another video from Diana, which starts at about 0:30: