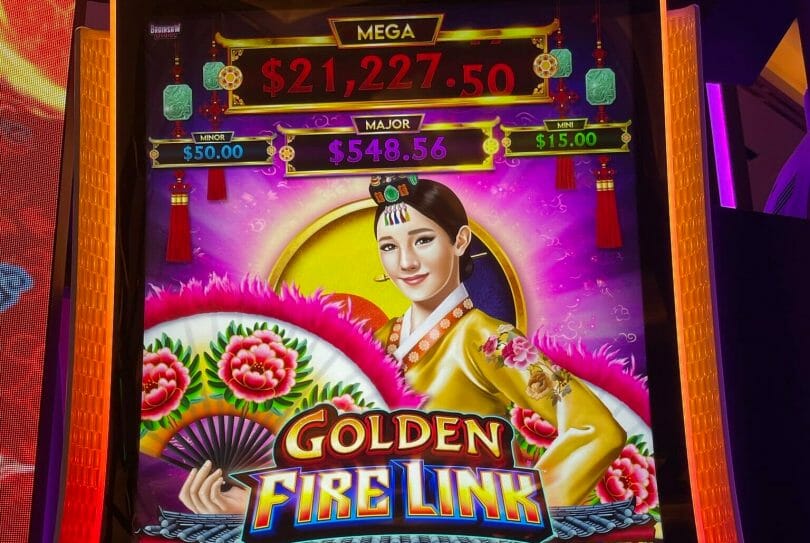 The Fire Link series of games is picking up steam, and one of the latest in the series is Golden Fire Link. Two such games are out on casino floors now, with another pair on the way that I saw at G2E.

Like the original Ultimate Fire Link series, the games all operate similarly, with the free spins bonuses being the key delineation between the games.

But the core structure of the game hasn’t changed, which fans of the game series will certainly appreciate.

For one, they haven’t forgotten about the lower bet players, with the same 50 credit bets at the low end as the original game, despite being years since that game came out.

There are more denominations around on the newer games than the older, with decreasing line counts as the denomination goes up, as in previous iterations.

As noted in yesterday’s piece about Fire Link as a whole, the frequency of the Fire Link and Free Spins bonuses are going to be about the same as the original. This meshed up with my multiple sessions on the Fan version of the game; despite my struggles previously talked about on Ultimate Fire Link Explosion, I definitely saw my share of Fire Link bonuses on this one.

The big new wrinkle is the addition of a spinning element. Kimberly Cohn, Director of Game Development at Light and Wonder and the one who’s overseen the series since the beginning, noted during a recent conversation that while the Fire Link bonus offers anticipation during the bonus, the spinners now add anticipation after the bonus, as you see what ultimately lands inside each one.

Spinners can appear on an individual fire ball, which can land to trigger the bonus or land while in the bonus. There’s also a new ninth row spinner added to the top of the traditional eight-row Fire Link feature, and Cohn says that you should be able to access that top spinner with some frequency – it shouldn’t be overly difficult to get there.

The graphics continue to get better and better on the series, with very impressive full screen animations for things like the Big Win announcement making great use of the gorgeous Kascada cabinet displays.

This latest series feels as well balanced as the original to me, a testament to the steady oversight and shepherding of the series. And the fact more variations of this round are coming should keep interest in Fire Link going for awhile to come.

The Jackpot Gents reach the top row of the Fire Link feature in their video:

Slot500Club showcases both bonuses in her video:

TheBigPayback got a jackpot handpay on the game:

Slot Queen is a big Fire Link fan, and had a good win on her attempt on the game: