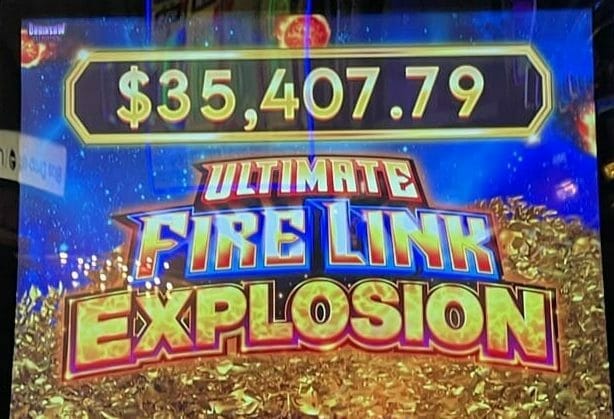 Now, two sequels have recently been making their way out. One is Ultimate Fire Link Explosion. There are a few changes to the basic format, which is on Light and Wonder’s ultra tall cabinet, the same that Ta-Da Panda features on.

The bet increments have increased 50 percent against the original game, from 50 credits to 75 credits, at penny denomination. That’s a pretty big jump, and the game features a few new features.

One is the addition of the Explosion progressive, which is above the other four progressives. To qualify for this progressive, you need to be betting at least $3.75 a spin, similar to other games with a larger top progressive. At the casino I was at, that top progressive was only in the $30,000 range; videos I’ve seen of the game have shown much healthier progressives elsewhere.

The need to bet more to get access to this progressive further pushes the bet requirements up if you want to be eligible for everything the game offers.

One of the most common things that happens throughout the game is monkeys throw fireballs onto the reels. This is an active event that happens a lot, but most of the time it resolves to nothing, as you still need four fireballs to trigger the traditional Fire Link bonus.

During an extended session, I had the monkeys sometimes even throw three fireballs, but with the lack of a fourth one, there was nothing to enjoy from them. I honestly think this was added to give the game some measure of activity, because it seems harder than the original, and I don’t think the ball frequency is really increased all that much, if at all, over the original for that.

The balls themselves seem to have bigger numbers, but I would hope so given the increased pay. Since the number of lines has stayed the same, and the base game pays aren’t horribly different from the older games, it would seem more of that money is going to the various bonuses.

Speaking of which, instead of the bonus automatically being free games when you get the three bonus symbols on reels 2, 3 and 4, you now get a wheel. The wheel features a number of options:

Super Fire Link adds four more rows to the reels, and also features an Unlock Row symbol during the Super Fire Link bonus. The Unlock Row feature is like landing four more fireballs for the count needed to unlock rows, so you can get to the taller rows, which feature better fire balls. It otherwise works like a standard Fire Link feature. If you got the enhanced Fire Link bonus on Ultimate Fire Link Power 4, it works identically.

Speaking of which, the free games will look familiar to those who played original versions like By the Bay, as it borrows the free games bonus from that version. You get a double tall reel set for five free spins, and any fireballs that land are automatically awarded.

The fire ball values do handle differently than on the original game. Here’s the distribution:

So to get anything above a Minor, you need to reach the top row.

The monkeys will throw fireballs onto the reels to help things move along, but again I feel like this just is an alternative to a fireball landing in the space it was going to anyway.

It does feel like in the bonuses the frequency of getting a fireball is improved, helped by the extra 50 percent in wagers, so it’s probably like a more/better bonus wager in that aspect vs. the original.

I plan to try the other sequel, Golden Fire Link, which I hope may not have gone the same direction. Keep a look out here for a post about that game before too long.

Slot Queen is a big fan of the original game, and here’s one of her first sessions on the new one.

NewEnglander82 got a free games bonus as well as a Fire Link bonus during this session:

PandaJock Slots got the Free Games, Fire Link and Super Fire Link bonuses in this session: