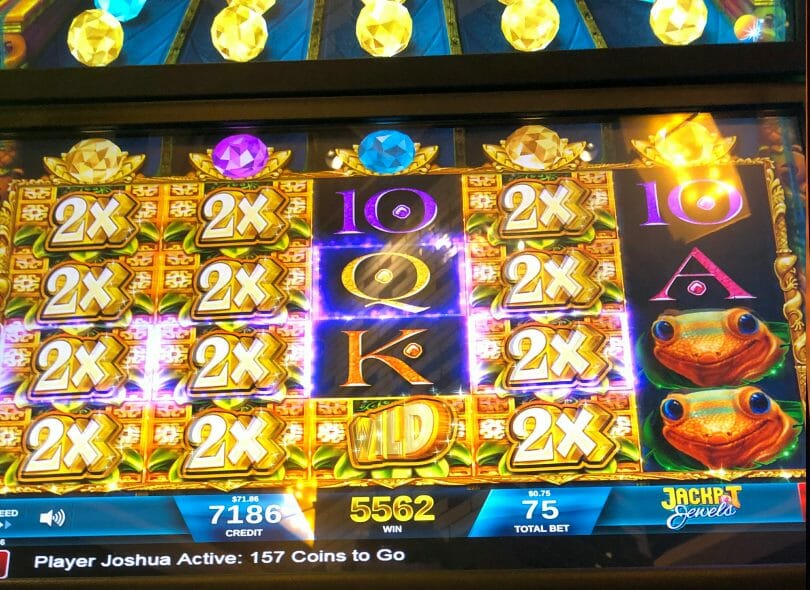 Game: Golden Gecko
Manufacturer: IGT
Advantage Play Potential: Very low
What Makes it Special: Chance for progessives with a full reel of wilds, visuals showing which progressive is next

IGT has been known lately for making a lot of games with Advantge Play potential. On the surface, Golden Gecko looks like another one of those. But in reality, the opportunity isn’t as high as it looks on the surface, and is mostly worth a casual play in the absence of other options.

The game features a set of progressives that can be won at any bet, with a higher chance of progressives at higher levels. Each reel has a row of gems above it, with the one closest to the reels the next one to be used; a gem drops whenever at least one wild appears in the column under which it sits.

Depending on the number of wilds present, additional benefits and progressive prizes can be awarded:

The gold symbols have more value as they offer a benefit regardless of the number of wilds. As such, having multiple reels with wilds and gold symbols above it can set up a very nice win, such as this more than 50x win I got on a 75 cent bet:

It doesn’t hurt that the progressives themselves aren’t particularly large; the top progressive tends to be pretty low relative to the minimum bet of the machine, starting around $250 and a 75 cent minimum bet on machines I’ve seen. So progressives tend to actually drop pretty often.

The gems are different for each bet level, which there are 5 per denomination, so like other IGT games if you happen across a multi-denomination game there’s more opportunities to review. Also, it’s important to remember that there’s higher chances of progressives and higher progressives, which make sense given the relatively small progressives at play; at a max bet of $3.75 on a standard Golden Gecko machine, the first level (blue) progressive is a pretty low 2-3x your bet at the start, so hitting it isn’t that difficult. Playing at minimum bet, getting the level 2 progressive seemed to happen relatively frequently.

But because there’s no guarantee you win a progressive, just a chance for one, the gems don’t offer an indication of whether anything is going to hit.

There is also a free games feature when the free games symbols land in reels 2, 3 and 4. 10 free games are awarded with higher opportunity for the reels of wilds to land, which in turn increases the chances for progressives or wild multipliers.

It’s a fun game with enough action to keep things interesting, but on the Advantage Play scale the benefits are limited. Still, if you see a lot of progressive gems and are having trouble finding other Advantage Play options, it may be worth a look vs. any non-AP slot.

See the Game in Action

Check out RandomSlots, who has a video featuring Golden Gecko:

And here’s a video from TheBigPayback which features the bonus being triggered for 10 free games:

Have you ever played Golden Gecko? Share your experiences in the comments below!