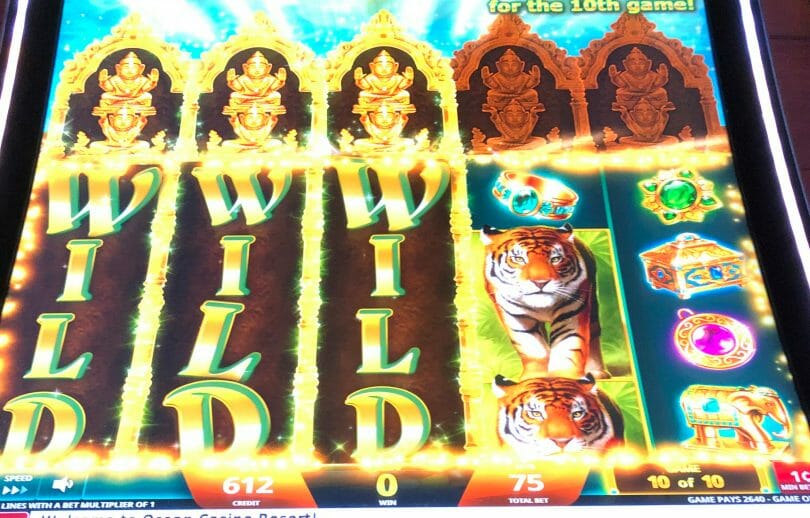 Like its predecessor, Golden Jungle, the new version lets you collect buddhas to ultimately trigger wild reels. But it adopts the Scarab model of 10 spin cycles for this iteration, which creates a more predictable way to evaluate the potential expected value of this game, and as such makes it a better Advantage Play.

Pair it with a more volatile, but potentially rewarding, bonus, and you’ve got a game that definitely pushes the envelope as a sequel.

Those who have played Golden Jungle get the general gist – it’s a 5×4 reel set with lines evaluated, but this one has 75 lines, like Scarab, but not like Golden Jungle (which only evaluated 60). There are five bet levels, and each bet level has its own set of persistent state reels, to avoid you getting a bunch of wilds betting 75 cents, and then attempting to up the bet to get the wilds.

Also like Scarab, the game played in 10 spin cycles, with wilds evaluated on the 10th spin. So you really have to think of this as a set of $7.50 spins if betting 75 cents, $15 betting $1.50, etc. You don’t have to actually do this – you can cash out whenever you want, and many players do, and that’s where part of the Advantage Play will lie.

The collection of Golden Buddhas still is what leads you to earning your wild reels. In this iteration, you need two within the 10 spin cycle to make a reel wild. When you land the first one you’ll have a visual indicator that you’ve made it half of the way there…

…and when the second buddha lands it becomes much more gloriously sparkly to tell you you’ve got a wild reel coming up. If you’re paying attention you shouldn’t miss out on that upcoming opportunity.

On the 10th spin, it will spin the reels, give out any last minute buddhas that need to factor in to the evaluation, turn all reels wild that are eligible, and evaluate the pays. IGT calls this Wild Stays, Charges and Pays, which is what they also call it for Scarab, so this is definitely a game more in the Scarab model. The wilds don’t stay around for four games, like in its predecessor.

With that in mind, the Adavantage Play thought process should look a lot more like Scarab or Diamond Mania:

As I’ve said in the previous reviews of Scarab and Diamond Mania, the advantage, if any, is particularly obvious on games like this, and so even casual players can understand where the game is in the process.

I haven’t seen this game in the wild yet as much as Scarab, for instance, but I suspect it’s simply because the game is newer and on newer cabinets that are still rolling out in casinos. I’m sure the game will become more available, like its predecessors, over time. I found it during my recent Atlantic City trip and it was a good machine to keep stock of during the trip.

The free games bonus is similar to Golden Jungle and Scarab, but the wild reel count is higher, and there’s still a volatility choice. The choices are:

This should give you an idea to how the pays are constructed; the line pays are a bit more watered down compared to its predecessor because of the expectation of more wild reels being present for evaluating pays.That said, the bonus isn’t easy to trigger on these types of games, and tends to be rewarding when you get it.

Another important note: In Golden Jungle the wild reels were always in the same position; the Grand version has the wilds moving around from spin to spin, more like Golden Egypt or Wheel of Fortune 4D.

As such, in both base game and bonus, this game, while a sequel in name, draws more from sister games than its original, other than the theming. However that actually enhances the overall Advantage Play potential, and so I suspect it’ll be one AP pros keep an eye on.

RandomSlots did a video on the game as well: