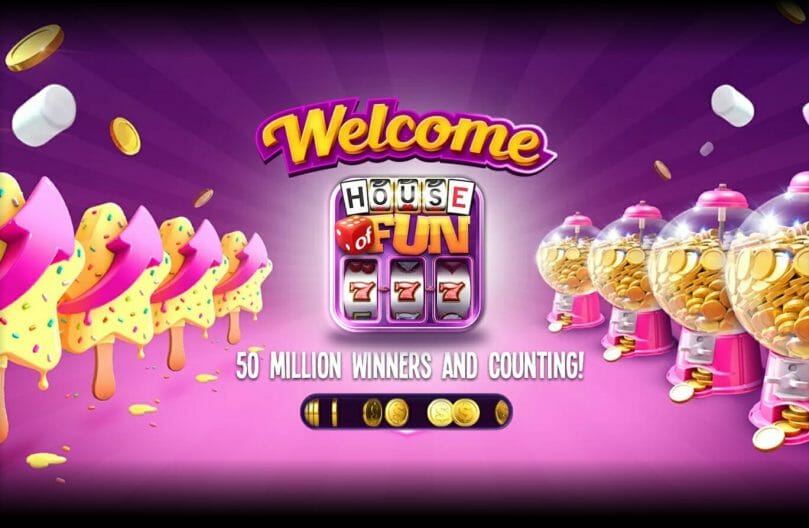 For those who have been following along with my various app reviews, we’ve covered a number of games from Playtika, which is linked to Caesars Rewards, in the past. House of Fun is different in that it is only available to play on Facebook.

Some of the traits of this game are consistent with other Playtika games, so be sure to read our reviews of Caesars Slots, Slotomania and Vegas Words for an understanding of how Playtika Rewards works, for instance. This review will focus on what’s special about House of Fun.

Overview of the Game

Like Caesars Slots and Slotomania, the primary focus of the game is slots. Also like those two games, the library of games available is very deep: More than 200 in all, with many having similarities in terms of game mechanic and math to those in casinos, but with themes unique to the app.

The game has a standard leveling up mechanism, as well as the ability to earn status in Playtika Rewards, linked across all the Playtika apps. Based on your level and Playtika Rewards level, your coin bonuses, store purchases and more will increase.

The game usually has one longer-term mission-based program. Right now, it’s Voyage, which has you collecting suitcases in an effort to earn enough to visit and collect photos in various cities throughout the world. Prizes are earned based on the collections completed.

This is very similar to a previous mission-based system they had but replaced; the game developers aim to keep it fresh by revising things periodically and offering something with a level of difficulty to strive for.

They also run shorter term missions; during my review period of the game a board game themed one was in progress. Coin prizes too can be earned here.

One small thing to note is House of Fun hasn’t been subject to the sorts of coin inflation seen often in many of the game apps over the years where you get millions of coins at a time. You get small bonuses, generally in the thousands, at a given time, and the game doesn’t require big bets to play. This can throw you off initially as the instinct is to want to bet more, and you can run out of coins fast if you do so.

There are a variety of ways to earn coin bonuses:

If you find yourself short on coins, the Facebook option is particularly helpful at generating coins in a short amount of time, better than the hourly bonuses, at least for me at my level and Playtika Rewards status level.

The game has a coin store like the others, where you can buy coins. Many times you can get power-ups or suitcases for the various challenges running as part of the gift. If you’re a certain level in Playtika Rewards you can also qualify for mystery gifts, which appear in the message center.

There’s also the now-standard Piggy Bank, which fills as you bet and can be broken open at any time. There is a countdown clock on this particular piggy bank, which indicates unlike the others there’s a time limit to break it open.

Like all the other Playtika games, Caesars Rewards is their partner, and you can earn Reward Credits when you make a purchase, at an earnings rate of about 1%, a bit more if you’re a higher tier in Playtika Rewards. You’re not going to bank a ton of comps as a result of playing, but if you’re going to buy coins it’s a nice bonus to be able to collect.

Rewards Credits can be used at any Caesars property nationwide, and with a few exceptions has a general value of 1 cent per Rewards Credit. (Some redemption options are 2:1 and are clearly outlined at the properties and within the program.)

House of Fun is a bit different in that it is focused on the Facebook crowd, but for those who are invested in Playtika’s set of games, it’s another one to keep in the mix. And if you make coin purchases, you can earn a bit of comps along the way.

Do you play House of Fun? Share your thoughts in the comments!