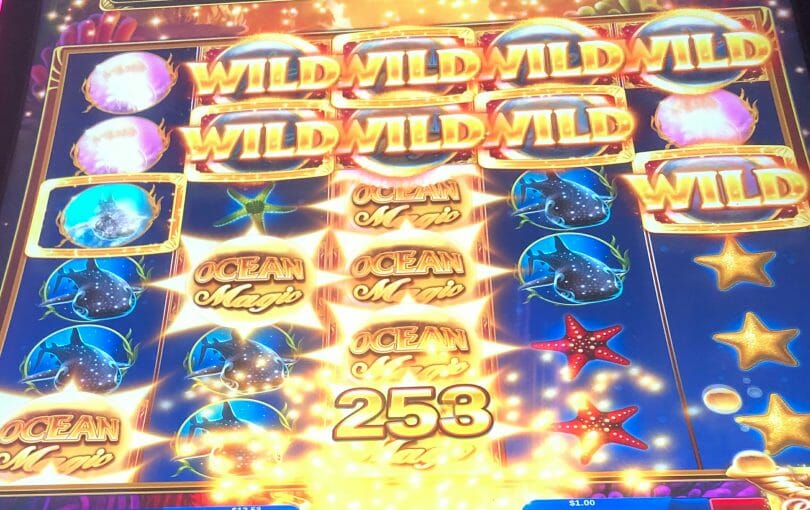 Game: Ocean Magic Grand
Manufacturer: IGT
Advantage play potential: Medium-High
What Makes it Special: Bubbles are still wild, and landing atop an Ocean Magic symbol makes a lot more wilds appear. Bubbles can hang around for up to six spins, up from four in the original, adding to the potential.

Ocean Magic Grand, like Golden Egypt Grand reviewed previously, takes an existing IGT game (in this case Ocean Magic) and amps it up a bit. In the process, the persistent state reels take on a slightly more important role, making it a slightly better Advantage Play opportunity than its predecessor, while retaining the traits that made it a good option to begin with.

A quick glance at the betting panel should look familiar to Ocean Magic players – you can choose a regular bet, or a Bubble Boost bet for double that increases the number of bubbles that can appear, but not the line pays. In the machines I played, Ocean Magic Grand had five line bet levels, each with the two options, or 10 total persistent state reel sets. On Ocean Magic I saw three bet levels, so six total options, by comparison. Like Golden Egypt Grand the minimum bet levels were retained.

What has also changed is you now have a 6×5 reel set, 50% more spaces for bubbles to float up and for lines to arrange. The game has 38 lines it evaluates.

Bubbles can be added on any spin, like before, and each spin move up one space within its reel. If it overlays with the Ocean Magic symbol, it expands in all directions to form as much as a 3×3 cluster of wilds, depending on the position of the bubble when it happens.

New to Ocean Magic Grand is a 2×2 bubble, which can add bubbles on all four sides of it when it lands atop an Ocean Magic symbol (but not diagonally like the single square bubbles), leading to a total of 12 spaces with wilds in a 2-4-4-2 pattern.

The floating bubbles remains the advantage, and with 10 persistent reel states there’s plenty of opportunities to check. Just like the original game, the closer to the bottom left of the screen they are, the more valuable they are. If a bubble is floating just below the reels, that means it will ultimately now be present for six spins

With the addition of two additional rows over the original Ocean Magic, bubbles take on additional weight and worth in the game. And similar to the original game, you know how much you have to invest to try to make the bubbles do the work, since there’s a set amount of spins before they disappear, barring the game adding more.

The game has the same free spin bonus arrangement on as its predecessor. Landing three treasure chests brings you into a bubble popping introduction that has you earn spins and additional picks. Once you’re out of picks, the free spins will play out with its own set of floating bubbles. Like Ocean Magic the free spin counts can get pretty high, as you’ll see in TheBigPayback’s video below.

Here is a gameplay video from the game’s manufacturer, IGT:

And here is a video from TheBigPayback showing a lengthy gameplay session, including a bonus: