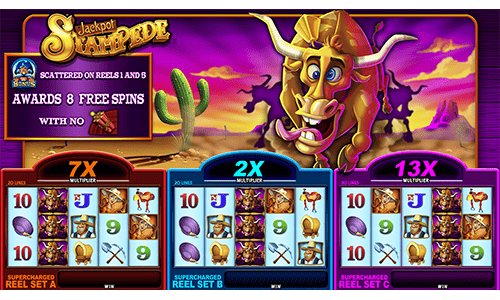 Last week I wrote about the Win it Again! series of slots by WMS, which showed one of a few examples of their experimentation with persistent states within a game earlier on. Another such example came out a bit later with their game Jackpot Stampede, which still remains on casino floors now but is getting harder to find.

The trick behind Jackpot Stampede was the addition of three smaller reel sets above the main set, each of which had one wild reel: 2nd reel on the first set, 3rd reel on the second set, and 4th reel on the third set.

When a full reel of wilds appeared on the 2nd, 3rd or 4th reel on the main set, it would increase the multiplier on the connected reel set above by the line bet multiplier (and the reels were available as long as some sort of multiplier was present). So if you were wagering a 1x line bet, they’d increase by 1x; 5x line bets by 5x, etc.

The three smaller reel sets would only spin if you got a spin symbol on reel 5; then they’d spin and pay out based on the multiplier earned and the line hits accomplished.

One risk though of each spin; on reel 5 there was also a dynamite symbol, which if landed would clear out all of the active multipliers on the top reel sets (effectively turning them off) and paying out a 5x credit prize.

The free spins, which are triggered by getting a bonus symbol on reels 1 and 5 (which I affectionately call Captain Crunch), give you 8 free spins without the dynamite symbol, letting you grow your multipliers and get more spins without worry of bombing out.

Like other games of this era, the persistent state multipliers above the reel were not to last from player to player; when you go to cash out it would offer you the ability to cash in the multipliers you have banked at the time; indeed, you could redeem the charge for credits at any time. The higher the multiplier, the more you got paid, and the reel sets to the left would pay more given the more valuable nature of a wild on reel 2 or 3 vs. reel 4.

But if you built up those multipliers, the redeem charge feature itself could be quite valuable, and something a player might contemplate vs. rolling the dice on another spin and hitting the dynamite. This is different than games like Win it Again! or Power Spins, where the banked items may or may not ultimately yield value; here, there’s a guaranteed value as long as you redeem it before you lose it.

A second game in this line, Roman Chariot, also exists, which doesn’t grow the multipliers on the top reels as quickly (with the lack of a Stampede element on its wild reels), but also doesn’t expire as quickly, but I can’t recall ever seeing that version out and about very much; Jackpot Stampede got a lot more traction for sure.

Here’s your classic RandomSlots introduction to the game, including how Jackpot Stampede differs from Roman Chariot:

Here’s a video from NewEnglander82, featuring the various aspects of the game:

Here’s a video from VegasLowRoller: