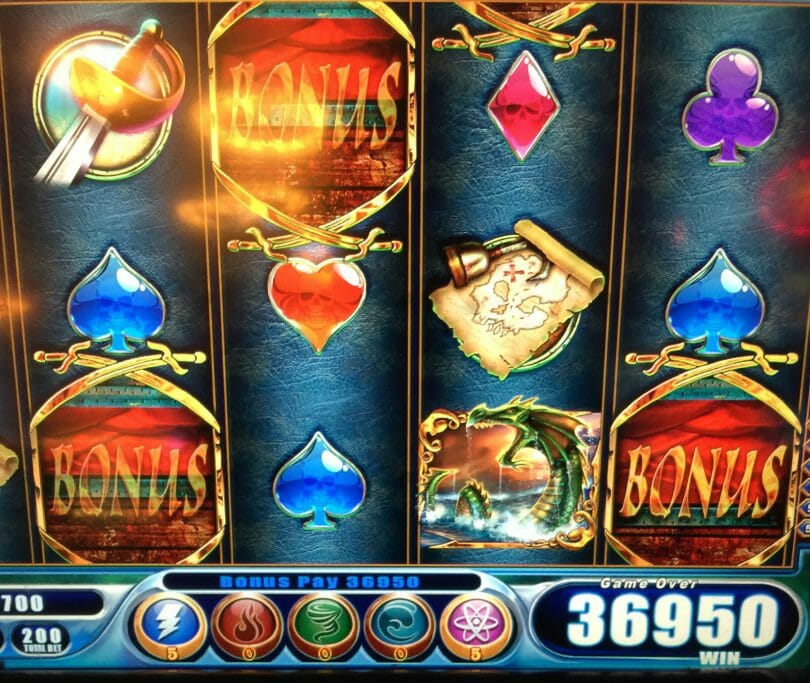 Having recently come back from Atlantic City, I got fresh exposure to one of my favorite ever series of games from WMS, a line of games called Power Spins.

There were three base themes, as well as a licensed Lord of the Rings version with some differences, but all of them featured an unusual mechanic, called Power Spins, which served as an earlier persistent state element that could be quite, well, powerful.

The games are now seven years old, designed for cabinets even older in many cases, so the number of them on casino floors are slowly going away. I had a momentary scare where the games were off at Caesars during my trip for two nights, but were reactivated, but it won’t be long now; only one remains in Las Vegas that I can find, near the front doors to Paris, and there’s one bank in Atlantic City left on the second floor of Caesars.

I’m going to go through my normal review pattern, even though I don’t really consider this an Advantage Play machine per se; despite the persistent reels and the potential for people to leave behind the Power Spins, I have yet to encounter this scenario and the machines are very loud about not leaving them behind.

Today I submit this love note to a game I wish would stick around longer, but will probably be extinct soon. I will be focusing on the three base games, as my exposure to the Lord of the Rings version is quite limited, and it’s different enough to warrant not further cluttering this commentary.

All of the games are 5×3 reel sets. There are basically three themes in two variations:

All three games have stacked symbols that can make the game quite spicy when things line up just right. Bets begin at 40 cents and on many versions top out at $2, although I’ve seen the occasional $4 max bet.

Golden Apple, with its all ways pays and 243 ways to win, is definitely the most volatile of the three, but all of them are designed to deliver when the right symbols line up. The 40 lines are set up in a way that any symbol appearing on the first three consecutive reels will pay a win.

This can also mean they can sometimes be tough, although along the way they’ll drop the occasional Power Spin to make up for it. Towards the end I’ll share my favored way to play them, and why I feel it’s worked well for my purposes.

During any spin, a Power Spin symbol can land. Each symbol is assigned to its own reel, and has its own power:

During normal spins, when a power spin lands, it awards it, multiplied by your bet multiplier. So if you’re betting $2 a spin and get Lightning, 5 Lightning Power Spins are awarded. You can either take them one at a time at a 1x multiplier, or take multiple together, increasing the multiplier (so you could with that award take a single Lightning Power Spin at 5x).

Power Spins are banked until used, and the bank is shared across bet levels since it awards them proportionally. But this is a persistent state on the machine – there’s no expiration on the Power Spins so a user can play them anytime they like.

You get five free spins, one of each of the five Power Spins being active. You can retrigger with three bonus symbols during the first four spins, or one or more when the final (Atomic) free spin is active, consistent with how it works in any other instance. It’s possible to retrigger multiple times within the same free spins cycle, and each retrigger gives you another round through each of the Power Spins.

Since Power Spins are persistently left as long as a player wishes to save them, if a player were to walk away from the machine with Power Spins available, an AP player could then play them off.

If you hit the end of your bankroll the machine will prompt you to auto play or manual play the Power Spins, however, in a loud, robotic female voice, and I think it’d be unlikely a player would walk away from that. But it certainly is possible and if so could be quite lucrative indeed since no wager has to be made to play a Power Spin – it would be all profit, whatever lands.

My Normal Method of Play

On both Pirates of the Deep and Crescent Moon, I prefer to put in 50x my expected wager in. Usually cycling through that much, I can count on three or more power spins landing; on occasion the game get stingy and only gives one or two, but I’ve also had sessions where it drops 8-9. If I’m doing this on, say, a $2 bet, that’s 8-9 5x additions to my bank, which can lead to some 10x or more situations for a Power Spin if I choose to use it all at once.

An example is the bonus above; I was betting $2 a spin, collected 2 Atomic Power Spins for a total of 10x (5x twice), and decided to go for it with a single 10x Atomic Power Spin, got it, and got some big hits to drive a $624 bonus. I had only put $100 in, so I was already at a small profit before this, but this was massive.

I find a more patient approach, betting lower so you can accumulate the Power Spins, is a wise approach for this game – that 50x my bet as a bankroll strategy has served me well on a variety of older machines, but this one particularly so. On Golden Apple I’ll sometimes even go to 60x or 80x because of the additional volatility of the game, but ultimately it helps me accumulate enough Power Spins to have a shot at something big, especially that Tidal Wave or Atomic Power Spin, where you get a lot more mileage.

Are you a fan of the Power Spins series? Had any major wins? Share in the comments!