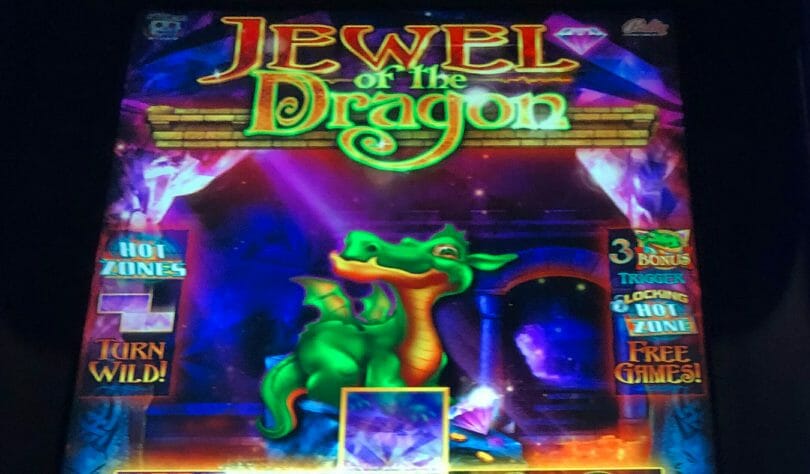 Jewel of the Dragon is one of my favorite Bally games from a number of years back. Aside from the cuteness of the dragon (which, in an easter egg, barks when touched), the game itself is fun, and offers a good amount of variety within its basic structure. It has a clone in Sea Goddess, so the below also lines up with that.

The game is a 5×4 reel set with 40 cent bet increments, good for players on a budget. There are a couple of features that make the game pretty fun, and unique. As such, it’s a game I love to seek out when a casino still has them around.

Various Tetris-like shapes fly by during each spin. If one lands on the reels, in part or in full, during a spin, the squares that are on the reels turn wild for that spin.

The shape and placement of said shape will of course have quite a bit to do with the pay that comes out of a given spin, but it adds a bit of spice to a base slot game.

Three jewels, landing on reels 2, 3 and 4, trigger a pick feature where you select a Hot Zone shape to come down and drop wilds. Most of the time they’re four squares in size, but you could luck out and get a bigger shape. It’s a true pick, with the other options revealed that you didn’t pick.

Like any Hot Zone scenario when the symbol drops down into the reels the spaces it lands turns wild.

Land three or more Bonus symbols to trigger the Free Games bonus. You get 8 free spins in the bonus.

The Hot Zone feature continues in the bonus, but a key change initiates – the wilds that land from Hot Zone pieces falling on the grid become sticky wilds, remaining for the rest of the Free Games bonus. This can lead to some sizable wins if enough wild spaces drop in, and the bonuses can become pretty sizable. The game has a max bet of $2, so you should keep your expectations in check accordingly, but getting enough wilds early should lead to a nice win.

This video from Canuck in Casino features a Jewel Feature and a Free Games bonus:

Here’s a video from CasinoManNJ featuring the game:

And here is a video from RandomSlots of its clone, Sea Goddess, which includes the basic pay table info: