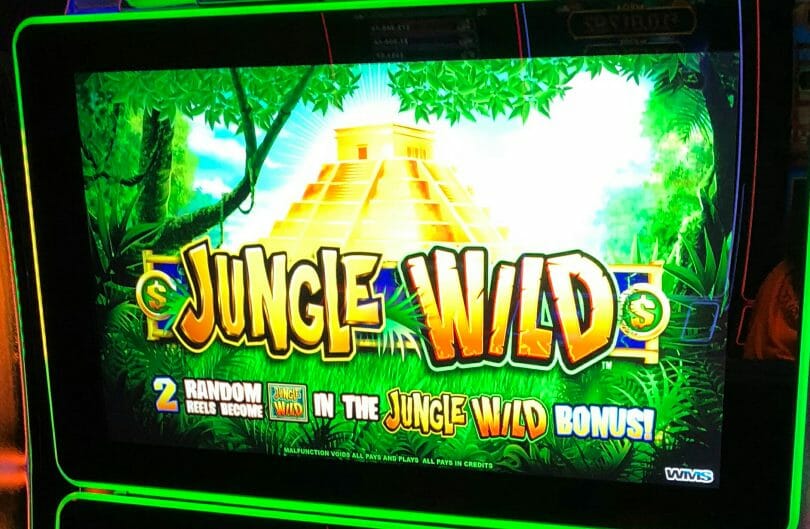 One game that has stood the test of time is Jungle Wild. The game concept is straightforward, and the popularity of it has not only led to sequels, but has led to a rare remake of the game coming out as the old slot machines the game was released on were finally being retired by casinos.

Given Scientific Games has only been releasing a few remakes a year (another recent one was the classic Goldfish), it’s in rare company and has a clear importance and place in the company’s portfolio of games.

I’ve been excited to see Jungle Wild making its way back on the casino floor, both in a higher limit version (quarters to dollars) as well as in a nickel denomination version. Regardless of format, the game endures as a fan favorite with a bonus format that’s hard to dislike.

Jungle Wild is a 5×3 reel structure. The game was built during an era where you can select the number of lines you want to play, and the remake retains that feature, welcome in an era of minimum bet inflation. The earlier version could be seen as high as 30 lines; the remake I’ve seen up to 20 lines.

Early in my slot playing days I realized how lucrative the game could be when I had a $75 hit on a low bet thanks to an unusually high number of wilds popping out on a base game spin.

The remake tweaks things a bit by adding must hit by progressives to the top. I presume that means the base game has been watered down a bit to make room for the progressives, which is a bummer, but the game didn’t seem much tougher in my rounds playing the newer version.

One of my home casinos still has the original, which I like to play when I can, but it’s hard to dislike the higher resolution and screen quality of the newer version.

During the bonus, two reels at random are turned wild. You can see immediately the potential of the game – if the wild reels hang to the left side, you can be guaranteed a pay on every line. If they hang to the right and you line up something on the left, you can have a much better chance at five of a kind. You can retrigger in the bonus by landing 3 more pyramids.

Jungle Wild was one of those games that got players excited about volatile slots, but offered a lot of potential throughout the game to keep things exciting. Even now, roughly 20 years later, the game still delivers an exciting slot experience.

RandomSlots has a video of the classic version, and as always the pay tables are there for review: