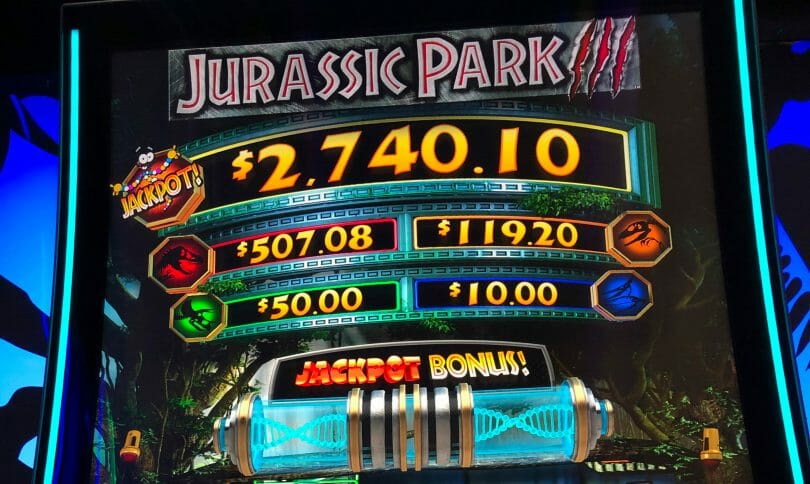 Jurassic Park III completes the trilogy of new Jurassic Park games by IGT. All of them share some basic game design features, with a Jackpot Bonus feature that is identical across three. Each also has a special feature when a full reel of wilds land, and this version is no exception.

This 5×4 reel set game has the same basic structure as its two sisters. I found it in Las Vegas in a similar 40 cent, 25 line configuration to the Las Vegas ones I found. As mentioned in my reviews of the other game, it’s also been in the while in a 75 cent bet increment, but I did not encounter that here.

Higher bets make it easier to hit jackpots, but all jackpots are available at any bet, just like its sisters.

The wild reels behave differently on Jurassic Park III. Like Jurassic Park, if you get one or more wild reels you go into suspense spin mode as the game illustrates if you got more. Then a meter at the bottom will tell you if you got 1, 2 or 3 respins with those wild reels locked. Lock enough reels and you could have a pretty solid payout for your efforts. If during a respin you get another full reel of wilds, those wilds will also lock and stay for the remaining respins.

The persistent state feature leading to the Jackpot Bonus symbols carry over from the other two games. Get a Bonus symbol on both reels 2 and 4 and you’ll go right into the Jackpot Bonus feature; otherwise if you get one it will hold and give you five chances to land the other. If you re-land one in the same reel you previously captured it, it will reset the clock to five more spins.

This is the same predetermined bonus found on the other two versions. Get both Bonus symbols and you’ll enter a picking screen; pick 10 times without falling off the board and you’ll win the top prize. Along the way if you pick one and it moves you to a jackpot space, you’ll win that jackpot.

Remember, your picking doesn’t actually determine the outcome of the bonus, so no need to stress too much about what you’re selecting.

The Free Spins Bonus feature symbols appear on reels 1, 3 and 5 like the other games. Land it and you’ll get 5 free spins that carry over the same wild feature as the base game. Get the Spino Game symbol on reel 5 and you’ll unlock the upper set of reels, potentially enhancing your win on that free spin.

The respin feature is available on the Spino Game reels above the main set, and you can also retrigger for more free spins in the bonus.

As with the other games in this series, and the IGT persistent state games, getting a free spin bonus is pretty tough; but it can be quite rewarding when you do.

Check out TheBigPayback’s successful session on the game: