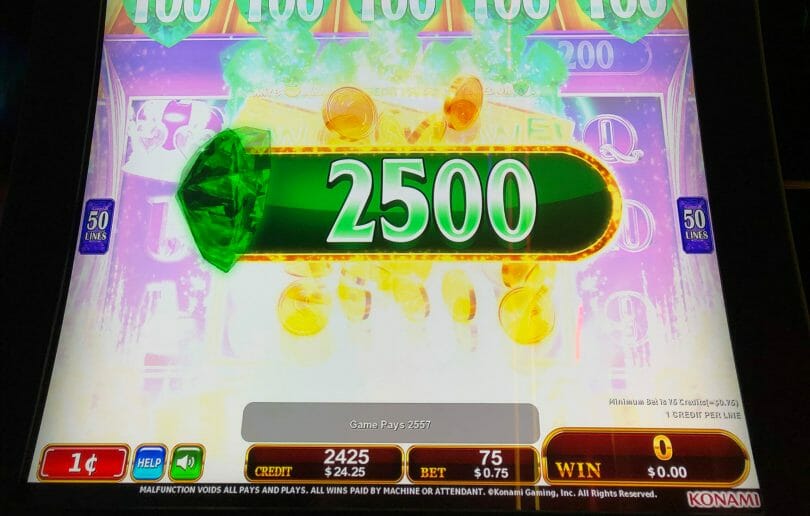 Game: Jewel Reward
Manufacturer: Konami
Advantage Play Potential: Extremely low
What Makes it Special: Gems that collect when three color-matching buckets land in the middle three reels. The bonus round gives you a chance at collecting every spin, heavily improving the chances of a Jewel Reward.

[UPDATE 2/17/20]: A couple of comments have come in regarding my review of this game, and I’ve put additional sessions in around some of the questions. I’ve lowered my score accordingly and updated my review.

Jewel Reward is an unusual game for a few reasons. For one, it’s the first Konami persistent state game reviewed on the site. Second, the persistent state feature is the same for all bet levels. And finally, in my opinion, it doesn’t offer much of an advantage at all. Let’s get into the game and go over all the features.

The game is a 5×3 reel set, standard for many Konami games today. Bets are in 75 cent increments.

One thing you’ll notice right away is most of the symbols are the same color as the background of the reels. This is because this slot really doesn’t emphasize these very much. Poker symbols require four of a kind to pay, and line hits even on the semi-premium symbols are pretty anemic.

On the bright side, the Jewel Reward bucket symbols act as wilds for all those symbols, so small hits are not unusual.

Get three of the same Jewel Reward bucket on reels 2, 3 and 4, and you’ll win the gem prize showing. The gem prize is a calculation based on the gems appearing above the reels – the more of a given gem color at a given point in time, the higher that prize will be. If there is a multiplier on the Jewel Reward bucket, the prize will be multiplied. You can land multiple multipliers, which will multiply things accordingly.

The gems won will then disappear, and new gems will cascade down. If a particular color hasn’t been won for awhile, this can lead the board to frequently be predominantly one or two gem colors.

On some spins the border box around the middle three reels will glow a certain color. This color matches one of the three gem colors: Green, red and blue. This means that all of the Jewel Reward symbols are set to either match that or be a multi-color symbol (thereby matching with it). This improves the chances of matching for that spin, but is not guaranteed.

Finally, if you happen to be the lucky person who lands three multi-color Jewel Reward buckets on reels 2, 3 and 4, you will win a Jackpot of between $1,000 and $5,000, depending on your bet level.

Three $ symbols on reels 2, 3 and 4 will trigger a 7-spin free spins bonus. Two key differences exist during the free spin bonus. For one, the border box around the middle three reels glows every spin (it says the feature can occur “frequently” but I can’t recall a spin where it didn’t highlight), so each spin is an increased chance to win a Jewel Reward.

The second is that getting a $ symbol in the bonus adds a spin, so you can get a lot of extra spins if they come frequently. Combined with the Jewel Reward prize increased frequency, the free spins can get good if you get a lot of retriggers and Jewel Rewards.

The fact Konami doesn’t see that as an issue should give you a good hint as to whether this is an Advantage Play opportunity. The reality is that there are 30 gems on the board, which pay $1-$5 depending on the bet level. So a full screen of one gem color (and I have never personally seen a completely full screen of a single color to date) would be $30 for a 75 cent minimum bet, which is 40 times your bet. Manage a multiplier or two and you could push it higher, but that’s not a lock. You also have a 2/3 chance you get something other than the gem that’s at the highest value, paying a lot less accordingly, which can easily strip away the benefit.

Like other open-ended Advantage Play opportunities, it’s a calculated risk. On two different sessions I burned through $40 quickly on minimum bet trying to chase a board that had one color prominently featured. Had I been betting max bet, that would have been $200 trying to get a $120 gem prize and praying by that point for a multiplier or a solid bonus to catch me up some.

The first time I hit that point, I kept going, got saved a bit by bonuses before hitting it, and ending down $20. The second time I just gave up (there were five machines open, and four were set up similarly, so no one was really chasing them either).

On the scale of Advantage Play opportunities, I’m not convinced this should be on anyone’s list, but if you have anemic options at your casino, perhaps it’s least better than nothing. But given the structure of the payouts, I’m increasingly convinced there’s not enough here to make this an advantage at all, and would proceed with caution accordingly.

Here is Konami’s promotional video for the game:

And here is a video from TheBigPayback featuring the game: