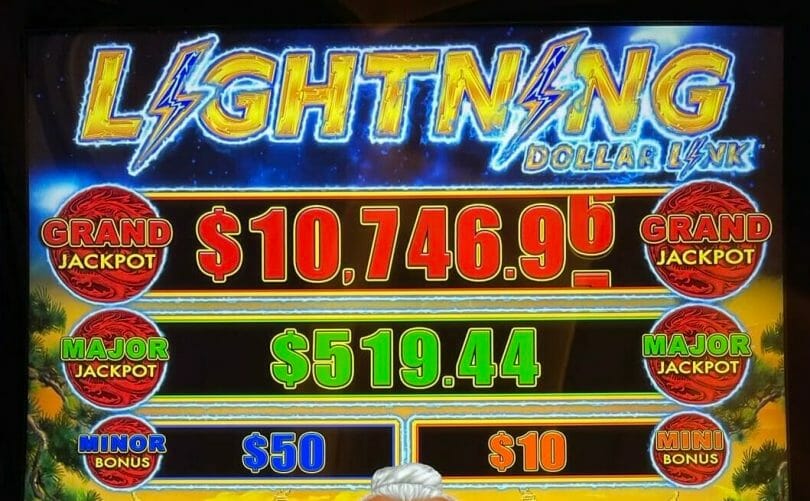 When Lightning Link came out, an executive at Aristocrat was quoted as saying that the game was a “10 year math model,” meaning there was a lot they could do with it and that it would be around for a long time.

Well, it’s getting close to the one decade mark and there’s no signs of slowing down the Aristocrat Link model with Hold and Spin features. The games remain crazy popular, and every so often a new version comes out to tweak the format.

First announced last year at G2E, Lightning Dollar Link had popped up everywhere ahead of G2E this year, and it has one key innovation that has players salivating – it can now award double and triple the Mini, Minor and Major prizes. The Mini and minor remain flat jackpots, while the Major is still a progressive.

There are four themes, built in pairs like most of the other Link games, and all four themes seem to echo back in some way to previous Link games, which is a fun little easter egg for those paying attention.

The core differentiator is the free spins. For instance, Kung Fu Master, one of the themes in this series, lifts a bonus structure from other Aristocrat games where the first two and last two reels are set up so the first and second are identical and the fourth and fifth are identical. This can make for better chances for line hits or hold and spin opportunities if enough symbols pop up in the right places.

Fans of the Lightning Link/Dragon Link/Dollar Storm/Buffalo Link games will be fans of this – this is just the next iterative step.

Here is a video from The Slot Cats featuring the games:

Here’s a video from Slotty by Nature:

Slotaholic offers a video that shows off a double Minor: