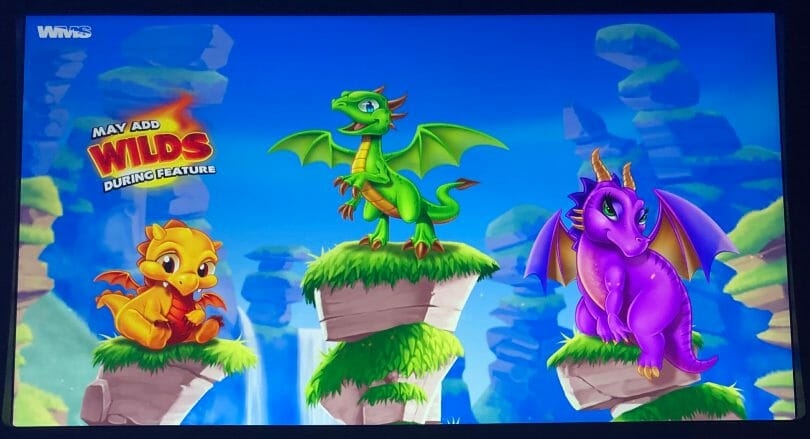 When video game manufacturer Williams decided to move in to the development of slot machines, they brought with them an understanding of video games, the graphical efforts that go into them, and a level of detail that was unusual for slot machines at the time.

That heritage continues to be borne out in the quality of games made by the WMS division of Scientific Games to this day. One of the more recent games to come out with a very strong visual touch is Little Dragons.

The game features a series of upgrades that can happen on any given spin:

That is largely the interesting part of the game, like many WMS games with reel upgrades that drive payouts, and bumping to the 75 credit will bring these out with common frequency.

The features don’t often payout a ton, but the charm of the game is it’s an active, low volatility game that drives regular features. Here’s a rundown of the features in more detail, along with the free spins.

In the Flaming Reels feature, multiple reels are upgraded. Within the base game, 4 or more reels will switch. In this feature the poker symbols are removed, increasing the chances for a sizable win if things line up successfully.

If a Flaming Reels feature is awarded outside the Dragons Feature, wilds can be turned to eggs (although they remain wild). If eight or more eggs appear on screen, they will then be cracked open.

Each egg will open to reveal a diamond or a wild symbol. (Like the eggs, diamonds also act as a wild.) If you collect 5 or more diamonds, you win a progressive as follows:

Your chances of winning a progressive increases with higher bets, like many games nowadays regarding progressives, but that means progressives are available at any bet.

The Dragons Feature can be awarded on any spin. Each dragon has a function:

The game will pre-announce better Dragon Features with a rainbow, for instance, letting you know the feature will be better. And finally, the Dragon Feature is more likely to occur on the More Features bet.

The treasure chests serve as your bonus symbol, and getting three or more will trigger a bonus. The award escalates with more symbols:

In the free spins bonus, one Dragons Feature is guaranteed, but tends to occur more often. The credit prize from the pink dragon in the Dragons Feature is reduced to a minimum 2x in the bonus, with the standard wager given a 2x-3x range, and the More Features bet given a 2x-10x range for it. It will still trigger a credit prize automatically if a 2x win on the reels is not achieved.

Flaming reels and the Jackpot Feature are also possible in the bonus, and work similarly to the base game, except standard credit wagers are only guaranteed three Flaming Reels in the bonus, while the More Features bet is still guaranteed four.

The bonus does feature a wager saver of 5x your wager, paid if you don’t achieve this. This only really helps with the three chests, since the initial payout for triggering the bonus on 4+ bonus symbols counts towards your total win for the bonus. Jackpot wins, however, are not counted in the bonus guarantee win.

The game tends to offer a lot of action, and the Dragons Feature plays out like many WMS games where upgrades are slowly rolled out. This helps slow down gameplay for those trying to get a lot of play out of a smaller budget. It’s not unusual for me to play for a significant amount of time on the 75 credit bet with $20 because of how this game works.

If you’re looking for lower volatility games, this is one to watch for at the casino.

Check out RandomSlots‘ video on the game, which features the pay tables: