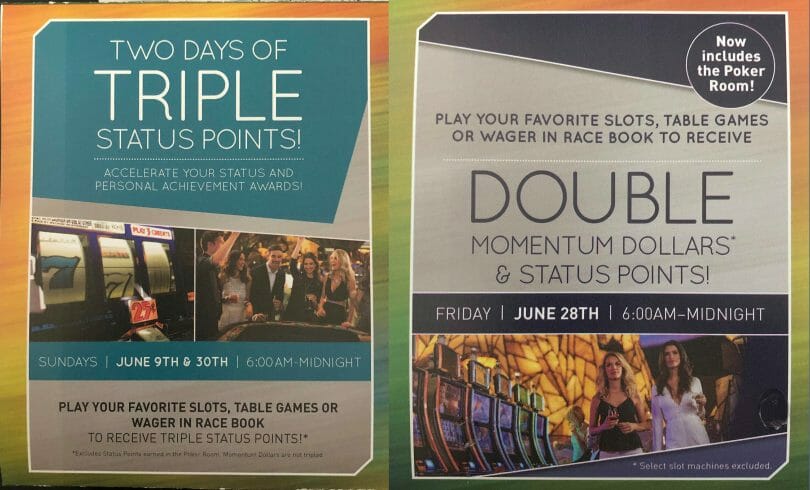 One of the most common, and for some gamblers most exciting, scenarios is the point multiplier. In these promotions, during certain days and/or times, your earnings are multiplied, which can make racking up points quicker.

But to make the most out of point multipliers, you should take a few steps to calibrate your efforts accordingly. Here’s a few things to think about.

What Type of Multiplier(s) is it?

As regular readers of the site will know, when you gamble at a casino you tend to earn tier credits, or tier points, and you also tend to earn comp dollars, or comp points.

These tend to be two separate buckets; the former is effectively your scorecard to know how you’re doing towards earning or renewing a tier. The latter tends to be what you can use as comps, or free play, or perhaps a bit of both.

Some casinos focus their multipliers on the comp earnings; others will offer tier credit multipliers as well. And on rare occasions, multipliers may occur for both buckets.

If you’re trying to build your tier faster, showing up for a comp point multiplier isn’t going to accomplish your goals. And conversely, if you’re trying to take advantage of extra comps, you might not find tier points that helpful.

When Does it Start/End?

Sometimes casinos start their promos at midnight, but more often than not they’ll start early in the day, say 6 a.m. The fine print of the promotion should let you know when it kicks in.

When I was at OYO taking advantage of their ongoing Wednesday 10x promotion, I was pleasantly surprised to see it kicked in at midnight. But as they note in their rules, you have to remember to take your card out and put it back in at midnight to activate it, or else it won’t kick in until you move to your next machine.

If your purpose for playing is to get that multiplier, make sure you card in once the promotion has officially begun.

What Games Are Included?

If your goal is to maximize that multiplier, you’ll want to make sure you know what you can earn it on, and what’s not allowed.

What Types of Games Should You Play?

As a general rule, lower volatility games will keep you in the hunt longer than a high volatility game where you’re not catching a break. Of course, get a sizable hit on one of those high volatility games, and mission accomplished! But particularly for those who are working on a tighter bankroll, you can maximize your points on games with a more even overall ride.

What is the Pace of Play?

One other thing to consider on a multiplier day – when you play games with lots of features and interruptions, normally good things when you’re looking for entertainment – those same features interrupt your betting.

Finding games that don’t have features and put all the money in the base game, or are quick to get back to the action, you might find those helpful to increasing your overall coin-in, and therefore getting you more points. In the process, many of these types of games also don’t have as high a volatility as games where you have to bonus or feature to see the bigger payouts, so it could help with that aspect too.

For example, Lightning Zap has no bonuses – it has a multiplier that comes out occasionally, but all the pays are in the base game. It’s also a faster paced game, so it can be an easy game to rack up points.

On a cruise ship once I earned 800 points off $4,000 in coin-in on Lightning Zap in about an hour, and thankfully on just $100, which is unusual. But it put me a third of the way to a free cruise with minimal effort. On a point multiplier day that coin-in would’ve been even more helpful.

What do you normally play during a point multiplier day? Share in the comments!