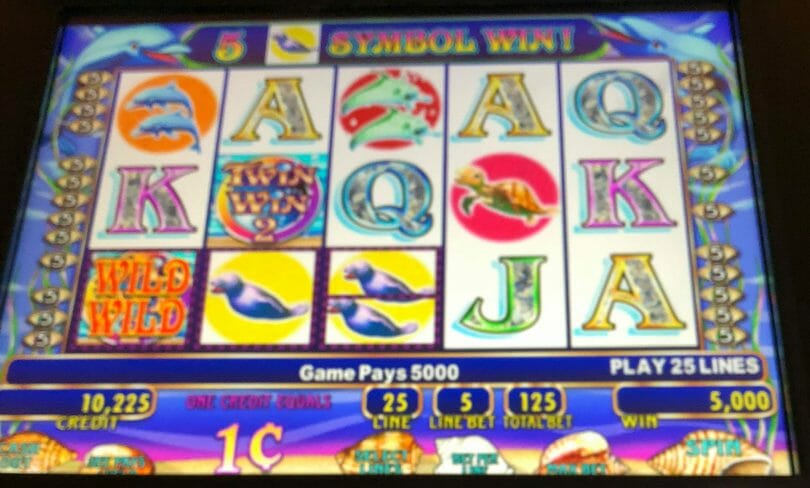 Many times players play games because they’re working to achieve a key bonus or feature. These sometimes hard-to-hit scenarios drive some of the enjoyment of a given game, and may even deliver a good chunk of the monetary value of a game.

But what happens when a slot is designed to specifically eschew common scenarios like a free spins bonus? There’s games out there where there is a regularly triggering feature in lieu of a full bonus, or just skips the bonuses altogether and focuses on the line hits, which can be quite impactful since all the money can be found there.

So today I’ll highlight a few examples of games like this, and what the special nature of the games provide.

Focus on the Feature

Rising Panda and Rising Guardian are an example of a game where there’s no true bonus round, but there’s a regular feature and an occasional progressive picking bonus that covers the special spin scenarios.

In the feature, getting at least one of the premium symbols in each of the first two reels triggers a respin feature that adds a row to the reels, and if you land more in those that align or connect with reels where you’ve already secured the top symbol, you can respin again, up to three more times, for a whopping 32,768 ways to win.

There’s also a jackpot progressive pick that can be triggered, which is closer to a true bonus but it’s a simple picking bonus and can be difficult to trigger. I wrote about this bonus in the past around true pick bonuses, and I’ll have a full write-up on the game soon.

Another game that’s about frequent features and no bonus is the Red Hot Respin three-reel game from IGT, along with its siblings. If the multiplier lands on the middle reel, you effectively get a respin, improving your chance of getting a substantial line hit. But the respin feature is the only real sort of anything you get on the game.

Then there’s games that don’t even bother with the feature. Twin Win (and its sequel, Twin Win 2) feature reel spaces with doubled up premium symbols that can lead to pretty sizable pays if you get enough in a row.

With all of the money in the line pays, you see bigger line hits more frequently than in some other games of a similar type, making it a fun ride.

Then there’s the three reel games. Many of the classic three-reel games didn’t have a bonus round, just solid line mechanics. Bonus Times is a great example of this, with multipliers opening up the chance for some insanely good line hits.

On the most extreme side there’s the Hundred or Nothing and $1000 or Nothing games, which literally have two outcomes – win the top prize or get nothing.

The top prize is effectively the bonus and the desired outcome, and it could happen on any spin. But there’s no other outcomes so it’s sink or swim effectively on each and every spin.

Then if you take it a step further, there’s the games that are on the slot floor but arguably go a step beyond slots, like Lightning Zap, which has multiplier features and on certain versions the chance to win a progress, but it too has no bonuses – all the payouts are in the regular “spins.” Add to the fact that that Lightning Zap is designed with a more than 90 percent overall payback, and there’s a lot of money in the base game to be found.

The Importance of Base Game Payouts

When there’s no free spin bonuses or features, and the games have to still meet a payout percentage, there’s only one place where the pays can be awarded, and that’s the line hits.

The end result is the potential for more meaty line hits to make up for the lack of bonuses or features, and so you can see some really good wins just off a good spin.

If you find yourself frustrated by the lack of bonuses or big wins, it may be worth shaking things up a bit at times and trying a game with a different structure.