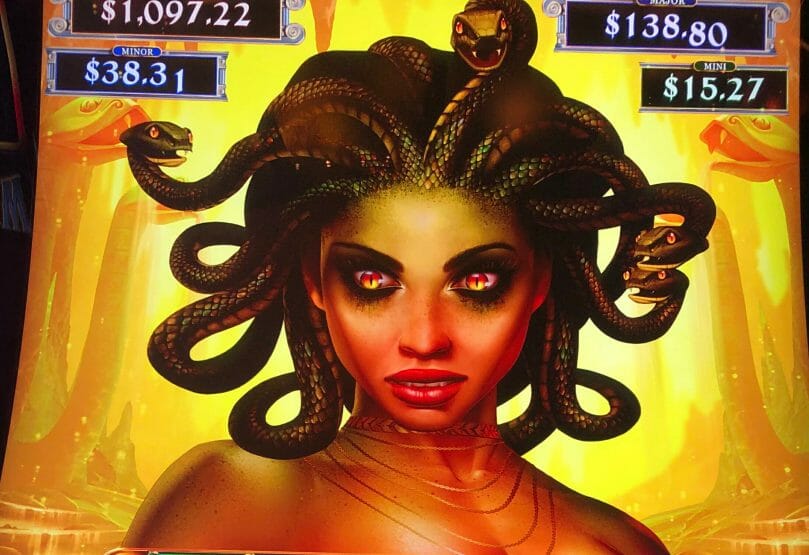 I previously wrote about the pairing of Zeus and Kronos in a series of sequels that led to Zeus and Kronos Unleashed. Based on the success of that, a new pair of Unleashed games continue that series with Medusa and Athena Unleashed.

Similar to Zeus and Kronos, each has a slight twist on the premium symbol in the base game (each matches one of their brother games), but the two share a Lightning Respin structure that differs from the brother games, but are the same with each other.

Let’s walk through the key similarities and differences between the two and their predecessors, and how the Lightning Respin differs.

How They’re All the Same

The Lightning Respin feature triggers the same way. Fill the reel on the base bet level, or get at least 6 in reel one on the More/Better bet levels, and you’ll get a Lightning Respin, with the ability to garner power-ups.

Get three or more bonus symbols to trigger the free spin bonus; the Boxing feature works the same where adjacent bonus symbols that are off alignment can actually give you more spins. The nudge feature on the bonus symbols remains.

Medusa Unleashed is the sister to Zeus in that two or more symbols starting from the left of the premium symbol, in this case Medusa, will pay. Athena is the sister to Kronos in that her symbol pays both left to right and right to left.

Like Zeus/Kronos, Athena and Medusa have a Lightning Respin Bonus that features a series of power-up opportunities. For these two games they are as follows:

You might notice that the features are amped up, but can happen less frequently, than Zeus or Kronos. This is a prime example of a slot sequel upping the volatility. This time, they’re not doing it by upping the bets, but having features that happen less often, but are generally going to be more fulfilling when they do happen.

You can increase your feature frequency with the higher more/better bet options; given they’re probably not going to come nearly as often, the extra bet from 75 credits to 100 on these versions may prove a bit more critical here than on the previous game.

Here is RandomSlots with an overview of Medusa Unleashed:

Diana Evoni played the new versions along with her friend Robert and saw a number of features: