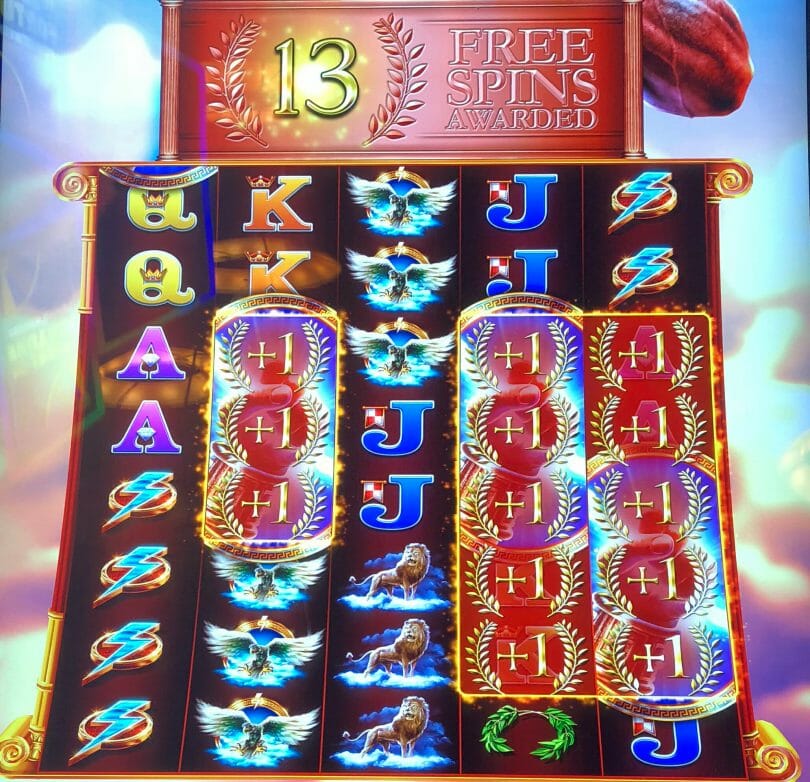 Zeus and Kronos are themes that have a lengthy history in the WMS portfolio, and into the Scientific Games area. While Zeus and Kronos were originally developed as separate games in the portfolio, in recent years the games have been paired as sister themes in a series of games, the latest of which is Zeus and Kronos Unleashed.

The Unleashed games are a direct sequel to a previous pair of games, Zeus: Son of Kronos, and Kronos: Father of Zeus, which had a 40-line game format.

On the old game, you had the regular base bet and the More/Better option. The base and More/Better bet on both the old and new versions have identical wagers.

By comparison, this 60-line game is one of the More/Better games I’ve previously talked about, but with a three-tier option:

With the base game and More/Better wagers identical on both the original and sequel, you’re spreading the same wager across 50 percent more lines on the Unleashed series, which has the effect of watering down line pays by anywhere from 30-60 percent, depending on the symbol. With symbols stacked in pairs or more, this does seem to make the newer series more volatile.

The major difference between the two Unleashed games is a feature picked up from their themes’ history:

This gives players a choice between two subtly different options, as opposed to outright clones, which is a nice touch. The predecessor games behaved similarly.

The basic concept of the Lightning Respin feature works identically to the original Zeus/Kronos pair. You spin to get as many Zeus/Kronos symbols as you can.

This unique way of calculating the free spins keeps the game interesting, adds some volatility and ultimately is a nice way to keep a player paying attention.

The Lightning Respins seem to be much more likely during the free spins, but I’ve certainly had free spin bonuses where they don’t pop up. The Free Spins bonus has a bonus guarantee of 5x your total bet.

Recently, two new Unleashed themes have been issued, offering some differences in the Lightning Respin power-up features but otherwise following the basic blueprint. In a future post I’ll review separately Medusa Unleashed and Athena Unleashed, but this an interesting way to expand the series vs. making another direct Zeus/Kronos sequel, and again introduces subtle differentiation vs. making direct clones.

And here’s a video from Slotlady featuring the game: