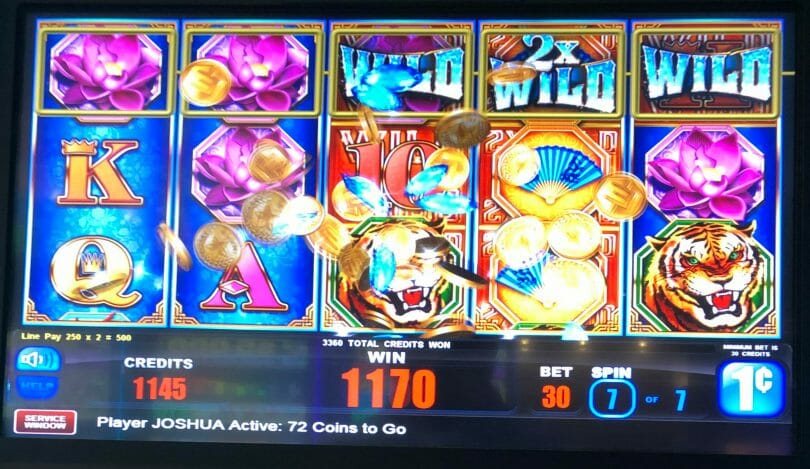 I haven’t covered a lot of Everi games here, but I do find some of their offerings quite fun. One of my favorites is a game called Money Frog, which is a pretty straightforward game with a fun bonus round scenario.

The game features 30 lines and 30 credits, making for a pretty low minimum bet for those into low rolling. Wild stacks exist on reels 3, 4 and 5. These become pretty important for for a variety of reasons.

Whenever a wild symbol lands on the reels, that wild becomes sticky for the remainder of the free spins. If a wild lands in a space wherever a wild has previously landed, a multiplier is increased by 1x, all the way to 7x.

Multipliers in the same payline (if you have two wilds with a multiplier) are multiplicative, meaning a 2x and a 3x would combine as 6x. Even on a minimum bet, you get the right arrangement and it could be massive.

In that respect it’s a bit like Miss Kitty, except only the last three reels are in play, the wilds are stacked, and the multiplier can get much higher.

The bonus round can be hard to get at times, but I’ve also had runs of 3-4 in a short timeframe, so it’s not impossible either.

This yields a pretty well balanced game that is not too volatile given its bet level, but has a solid amount of potential.

RandomSlots has the pay tables, and a big win, in this video:

TheBigPayback demonstrates all of the features of the game in this video: