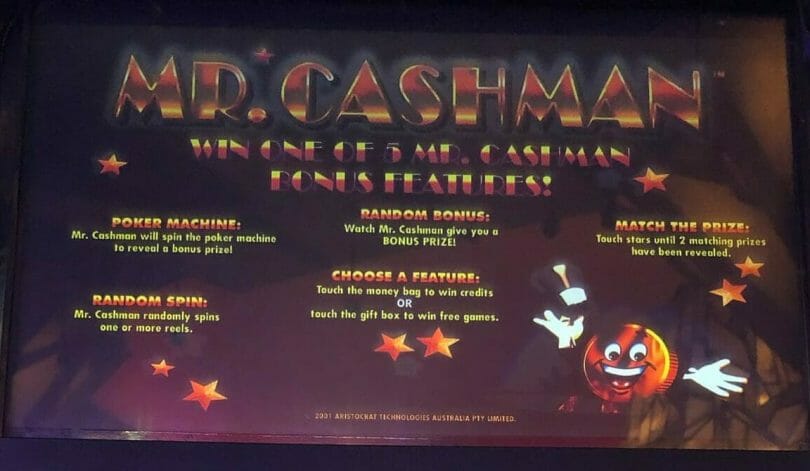 The Mr. Cashman series is among the time tested slot machine formats that Aristocrat has brought to the world. The games have been reformatted onto newer cabinets multiple times over the years because players still enjoy playing them.

I personally have gotten back into them again in recent months, with the Jailbird theme (which has a clone in African Dusk) the one I’ve been playing most frequently. A few things about the games remain aspects that I enjoy today.

Second, in lieu of a straight up bonus, you’ve got a well-paying scatter pay that shows up quite frequently and matches with wild symbols, bringing some helpful pays along the way.

The Mr. Cashman features become your bonuses, which incorporates free spins and a lot more:

With regular scatters and features, plus decent line hit potential, the game can be a decent ride with lots of opportunities to get ahead.

The games keep getting updated to newer machines periodically, and have a pretty standard place on many a casino floor. Some players have reported the older Mr. Cashman machines disappearing from casino floors in Nevada and Las Vegas (potentially because they had to be) but newer versions of the game are still out there.

Here is Aristocrat’s promo video for when they updated the game for newer cabinets back in 2012, including examples of the five bonuses:

Here is a video from TheBigPayback on the machine with lots of features:

Brian Christopher played the theme on one of the newer cabinets: