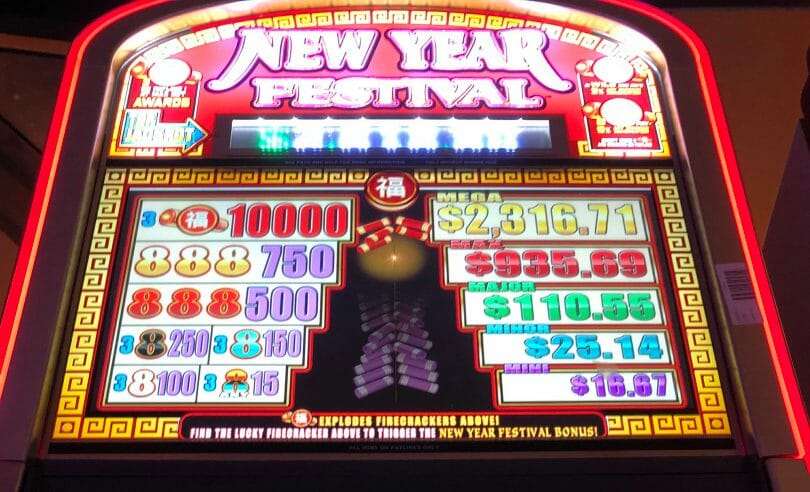 New Year Festival by WMS, a somewhat older game compared to some of the others we’ve reviewed, is very straightforward. No bonuses exist – just a firecracker feature that eventually will lead to a progressive bonus.

Because of the nature of how this is structured, it’s considered to be one of the classic Advantage Play offerings out there, even if it’s somewhat harder to find nowadays.

The game started with 15 strands of firecrackers (each strand has 34 firecrackers, meaning a total of 510) and a single firecracker is selected. as strands are completed the number counts down. When the firecracker that triggers the progressive bonus is triggered the screen will update and have you choose an envelope. This is a predetermined pick, as it will just start revealing coins until a progressive is awarded.

One thing I do like about this game personally is that although the lower progressives are definitely a lot more weighted, The middle progressive, the Major, does seem to pop up quite frequently in the weighting. During a review period where I was playing the game before writing this piece, I got the envelope pick at 50 cents early in the strands, and managed a 200x win thanks to winning the Major. This isn’t the first time I’ve gotten it either. The Maxi and Mega, being the top two, are definitely harder to get than the others.

The firecracker countdown is where the advantage lies. Effectively this is a different form of a “must hit by” progressive. The difference is you don’t know which progressive you’ll win until it triggers. You do know that

One thing that makes it less advantageous is you can go awhile without getting a firecracker on the reels. But the lower the strands count, the closer to a progressive you’ll know you’ll be. As such, seeing a machine with a lower strand may be worth taking a shot.

How low? If you see 5 and under the advantage is much higher, but anything at the halfway point or lower should be worth a consideration, which would be at the 7 strands or less point. Just remember you could get firecrackers on the reel immediately, or it can take awhile; when they’re not readily coming it could immediately make the advantage disadvantageous, which is why I rank this one medium-low.

There’s only one strand for all bet levels, unlike other machines where each bet level has its own persistent state, so lower bet players may find this one particularly inviting, especially the 9-line lower denomination version of this game, where you get access to a shot at the progressives for as low as 50 cents a spin.

RandomSlots played the game awhile back, learned the lesson about the strands and shared his feelings about it.