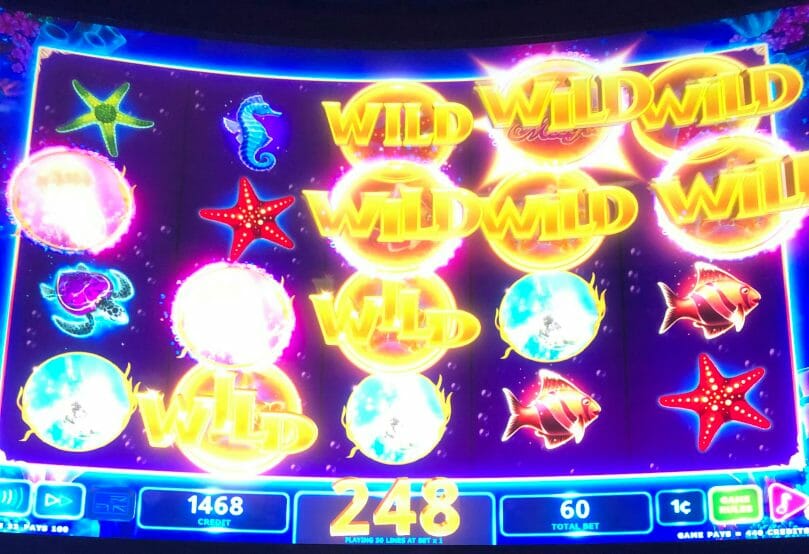 Game: Ocean Magic Ultra
Manufacturer: IGT
Advantage play potential: Medium
What Makes it Special: Bubbles are wild, but landing atop an Ocean Magic symbol makes a lot more wilds appear. Bubbles hang around until they’ve moved off the screen, even if a player cashes out.

The Ocean Magic series, which includes the original as well as Ocean Magic Grand, has proven quite popular on casino floors, so it makes sense another sequel would be in the works.

Ocean Magic Ultra moves to their premium cabinet, and along with the basic mechanics you’ve come to expect from the game, a wheel and jackpots are added. (Ocean Magic 4D is the same game, but on their True 4D platform. So everything about this game also goes for it.)

When I first wrote this, I couldn’t find a single video of this game, and some slot channels I’ve talked to haven’t seen it, so this must be a bleeding edge install where I found it by me (rare, but exciting!). I can find records of Ohio approving it in September, so it’s probably just in the beginning of its roll out now.

Since then, more has come out about the game, so this review was updated 3/12/20.

Like the original, this is a 5×4 reel set game with 50 lines. Bubbles can be added on any spin, and are wild. They move up one space in their reel row with each spin. Once they reach the top of the reel set, on the next spin they will move up and out of the reel set completely.

This version has five bet levels, with the ability to double your bet for a Bubble Boost in exchange for the opportunity for more frequent bubbles being added, just like previous versions.

There are a total of 10 persistent state reel sets accordingly, one for each of the bet options on the panel. The original Ocean Magic machines by me only had six, so this is an improvement, although Ocean Magic Grand had 10.

You’ll see like many other sequels, the bet has been bumped up by 20% on each tier level, but you’ll also see a $10,000 jackpot listed; that’s the main change and addition to this version. But more on that in a moment.

One thing that’s clear is they’re making the most of the quality of this machine’s hardware – the new version features art that’s absolutely gorgeous. IGT has not only been pushing hard on the game development side, but they continue to push forward with some beautiful looking games, and this one’s no exception.

The Magic Wilds feature returns in this version; in it, when a bubble is in the same position on the reels as where an Ocean Magic symbol lands, it and the spaces in all directions around it turn wild.

This can quickly set up some sizable line hits, as this 25x hit shows above. If you line up multiple bubbles with Ocean Magic symbols, it can be a pretty good hit indeed. That hasn’t been lost on the new version.

The free spins then works just like the main game, with bubbles floating up as wilds and when they overlap with Ocean Magic symbols, they expand.

The main new addition is a Wheel Bonus feature, when you get a wheel spin icon on reel 3. The wheel spin gets you access to the jackpots, which were also added on to the game as part of the upgrade for the sequel. You can also activate the fish bonus (which brings out fish that adds bubbles) or the whale bonus (the latter described above, but also brings out bubbles).

The game tells you in a few places places that higher bets increase chances for the top jackpot, which as you can see on the bet panel was $10,000 in the case of the game I found. Higher bets also increase the other jackpots proportionally, which are shown on the top box of the cabinet. They’re fixed amounts, so they’re not progressives.

Nothing’s changed here – the bubbles and their placement when you sit down are really what gives you the opportunity here.

In each bet option, you check for how many bubbles there are – the more present, and the more on the left side in particular, the higher the advantage you’ll find. You also know how many spins to clear off the bubbles that are present, just like the previous versions.

With 10 options, there’s plenty to check, and with bets as high as $6, there’s a lot of opportunity here, which will offset the fact that you have to now spend 20% more to clear off the same opportunities as the original Ocean Magic. Of course, if you get a progressive wheel in the midst of it, that could take the edge off, and there are more ways than before for additional bubbles to be added, extending the opportunity.

Since our original review was posted, videos have surfaced online for the game. Here’s IGT’s promotional video for it: