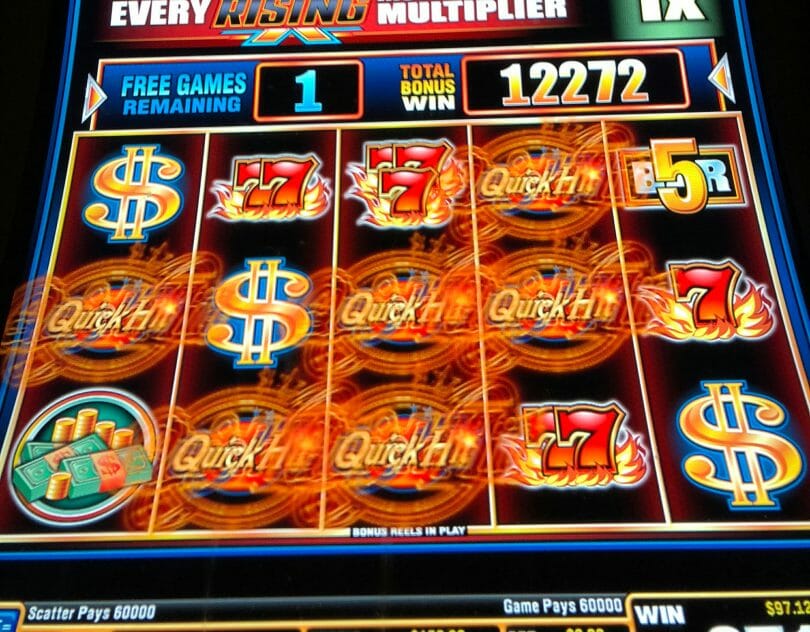 Regular readers of the site know my enjoyment of the Quick Hit series of games, and I’ve previously written about the Quick Hit Riches variation.

Like all Quick Hit games, you must max bet to be eligible for the Quick Hit progressives. But in many games in the series, if you enter the free games, you’re taken into a game that has multipliers in the bonus round, and the progressives are basically off the menu.

As such, once you’re in the free games, everything’s proportional to your bet, and so the wins just come down to what you were wagering.

So with that in mind, here’s a fun handpay that happened to CT Slotters on a minimum bet on Quick Hit Riches, but that minimum bet was on a 9-line quarter denomination configuration. That makes the bet $2.25.

The bonuses start at 3:21, and the bonus picking led to 8 free games with a 3x multiplier. When the Rising X symbol comes out, the multiplier increases, so they could only improve from there, which they did, getting quickly to 6x within the first half of the free spins.

This is part of the challenge of the game – the Rising X symbols also serve as blockers, so you want to build them up and then get a really good outcome.

The first bonus was not much to write home about, but then it cuts to another bonus where they built to the top of the chain with an 8x multiplier. Right after that, 7 Quick Hits land.

The video has a bunch of other Quick Hit fun, but that handpay just shows the potential of a game like Quick Hit Riches on a pretty small bet.