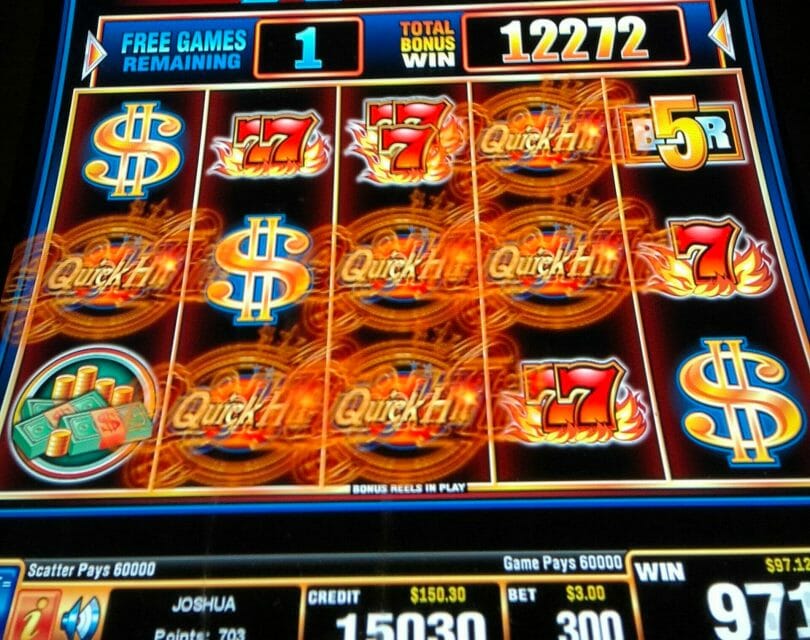 Regular readers of the site know my love for Quick Hit games, but Quick Hit Riches is one of my all-time favorites. A lot of the reasoning for this is in the Rising Free Games bonus, which has a strong amount of potential.

While some casinos have this game in a $3 max bet version, a lot also have it in the classic $1.50 max bet version, which is appealing to me. I found this quite frequently during my recent Las Vegas trip, and was rewarded multiple times accordingly.

Let’s start with the base game, which because this comes from an earlier era of the Quick Hit series, still retains some of the potential the base game offers. For one, Quick Hit wins pay off the standard model, of your bet back for 3, 5x for 4, 10x (or the 5 Quick Hit progressive) for 5, and so on. It’s not watered down pays like on other versions.

Quick Hit Rising has a couple of base game variations, with the main difference being the number of mixed pay mid and high-end symbols; the Triple Blazing 7s Wild version has three 7s and two bars, while the Black Gold Wild version has two 7s and three bars. Both have great line pays for mixed 7s and extremely good ones for matching 7s. It is always nice to have mixed symbol pays in play, especially on higher paying sets of symbols.

The free games bonus then takes it further, which has incredible potential. You get to pick until you match three bonus game options, just like other Quick Hit Games, but the options you get to choose from are:

The multiplier is just your starting multiplier, as you can land 1-3 Rising X symbols on each spin, which increases your multiplier by 1x, up to a top possibility of 8x. This includes multiplying the value of the Quick Hit symbol, which loses their progressives but gains the ability to pay a lot more with the multiplier.

It’s the Quick Hit line hits where I’ve had some of my best benefits. One of my best hits ever was on such a scenario, seen above, which was on a $3 version at a 4x multiplier landing six Quick Hit symbols.

On my most recent trip to Las Vegas, on the same exact $1.50 machine at Treasure Island, I got the six Quick Hit symbols twice more, each time on 3x, for a $225 payout each time. I had picked the worst combination of 8 spins starting at 1x both times to start the bonus, and remarkably my final win on each bonus ended within a $1 of the other.

Both were over 150x wins given the Quick Hit win, and show the potential of the game – another Quick hit would have doubled my win!

This is a fun, classic variation in the Quick Hit series that provides an exciting free games bonus.

Here is a video featuring the game from TheBigPayback:

And here is a video from Slotlady: