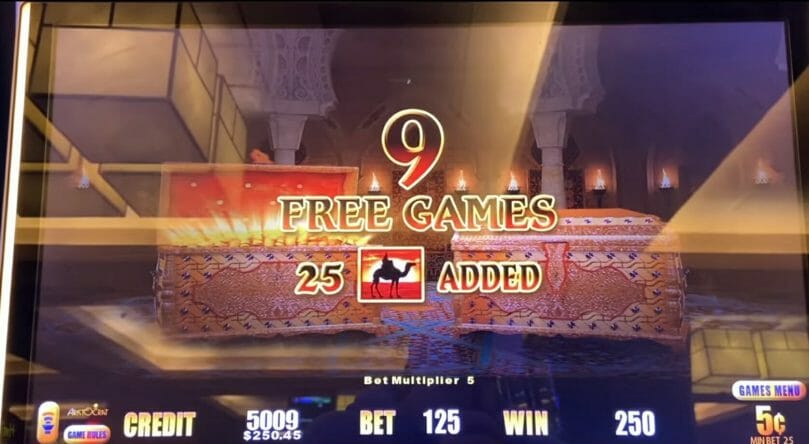 When a machine is treating you well, it’s hard to exactly know when to step away. This is a great example of a video where a player maintains their bet, keeps things going, keeps getting lucky and ends up with a substantial profit, showing up the volatility of a game, but also the potential of a game.

Here’s a video from Diana Evoni that starts with a $100 stake and spins at $5 each, the baseline level on this high limit Lightning Link Sahara Gold machine.

There isn’t one massive win that builds the ticket fast – no win here was more than the 50x or so range – and the majority of the wins came out of the Hold and Spin bonus coming out frequently enough to keep the ticket on a positive upswing, but ultimately Diana managed to see a substantial victory against what is a sometimes notoriously tough game.

Of course with 20 wagers before her $100 stake would be gone, it could have easily gone the other way, and for many players certainly has. But this can show why players can get so excited about Lightning Link despite its difficult reputation sometimes – the wins are in there, and can add up quickly.

Like many slot channels, Diana Evoni has played her share of Lightning Link. As a bonus, here’s a video where she lands the major on a mere $1.50 bet, a reminder that the the progressives really are available and open on just about any bet level on games like this. Your chances will change based on your overall bet level, but that chance is definitely in there.