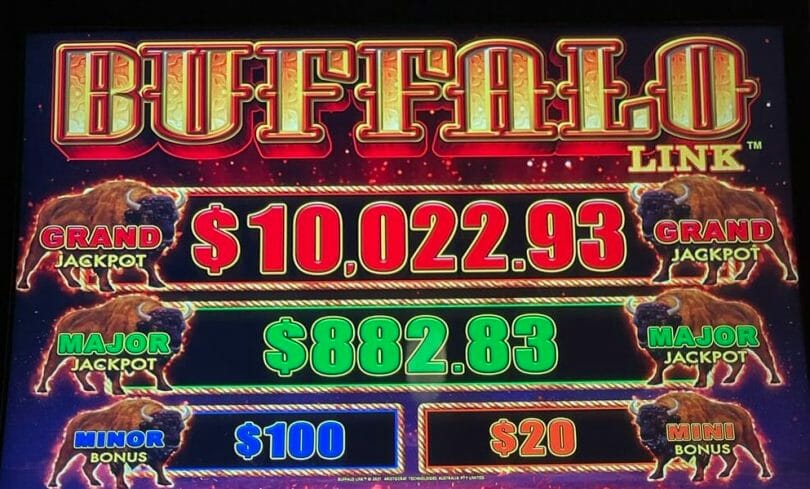 On some slot forums I’ve seen the question floating around on the topic of the Wager Saver, and whether someone has actually won anything off of them.

Like any slot machine bet, a single wager is hard to make anything specific happen, but it’s certainly possible. In the past I’ve shared the example of the Slot Cats winning a sizable handpay off a Wager Saver, but now we have another pretty darned good example, starting at 8:21 on this video.

This video comes courtesy of Slot Queen, who’s had some pretty unusual wins on her channel over the past few years, and this one’s up there in terms of a rare occurrence.

It starts off with winning a feature on Buffalo Link based on the counter hitting its win point, which happened on the wager saver spin. She was spinning at a $15 spin, so that’s a sizable wager to get a bonus against.

The game offered an 8 free game bonus, and during that bonus a hold and spin bonus was achieved on game 7 of 8. At first she kept collecting $15 cash on reels prizes, equal to 1x her bet. Then, her 17th prize was the Major, which alone was a handpay at $1,426.84 progressive.

She had no credits left on the machine, but by the time she was done with her 8 spins she had a $2,000 handpay!

If you think through the various scenarios that had to happen – successful wager saver spin, getting that counter to hit, landing the hold and spin, scoring the major. Each of those isn’t simple to do on their own, let alone in succession, which makes this quite worthy of a Slot Moments review!