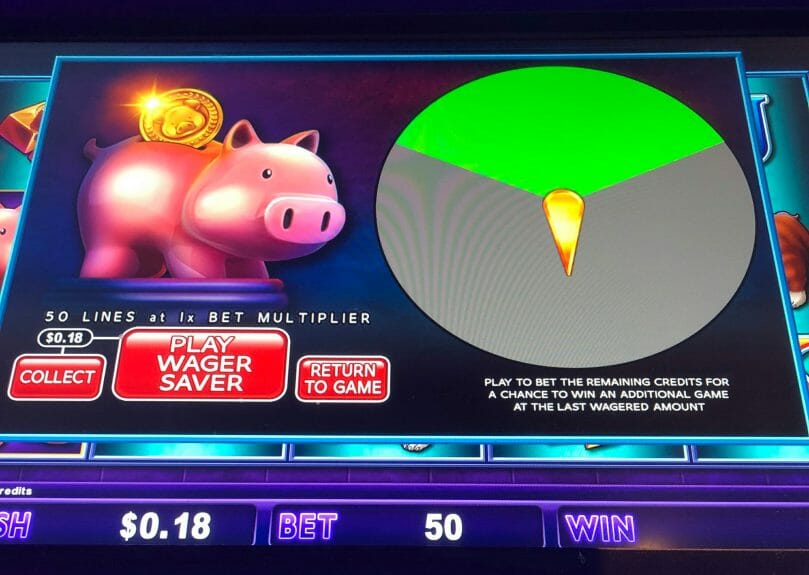 An increasing number of slot machines have a wager saver bet option when you’re nearly out of credits, offering you one last chance to spin and hopefully come back from the edge. Is the Wager Saver worth it? What is it really offering? Today’s post will clear up the basics.

Wager Saver (both name and concept) were initially popularized in a series of WMS games, but similar concepts have appeared on some recent IGT games, as well as Lightning/Dragon Link where you can take one last chance. They all work effectively the same way.

The Wager Saver appears when you do not have enough to make another bet at your current bet level. Your chances of winning the Wager Saver are directly proportional to what percentage of your bet your credits equal.

For an example, let’s say you were betting $1 per spin and have 50 cents left over. On the Wager Saver, you have a 50% chance of winning the Wager Saver and getting another spin. As such, the wheel or mechanism determining the win/loss is unweighted and true to odds.

Why Doesn’t My Casino Have It?

I recently have visited places where the Wager Saver was not present on games I would normally expect to see it, and in at least one location it was nearly not available at all. Like many features on machines, some casinos will opt to not offer them.

The why could be anything from the mundane (just don’t want to have it) to the believed-nefarious (they’re hoping you leave credits behind or throw away tickets with a few cents), but like anything in the casino world operators have some settings options and they decide what will be available.

Should You Do It?

Some wonder whether there’s value in getting one more spin on a slot. Some will give it a chance if the odds are 50% or above. Still others will do it every time when offered to avoid cashing out change on a slot.

In the end it, like every other wager in the house, is a gamble. Since there’s no house edge on the wager saver, it’s really down to whether you want to take a shot at one more spin. That spin could be a bonus, a good line hit, or nothing.

I will tend to do it unless the sliver’s tiny, because I’ve wagered how many times already and it’s one more shot at something.

Do you bet the Wager Saver? Avoid it? Share your opinions in the comments below!