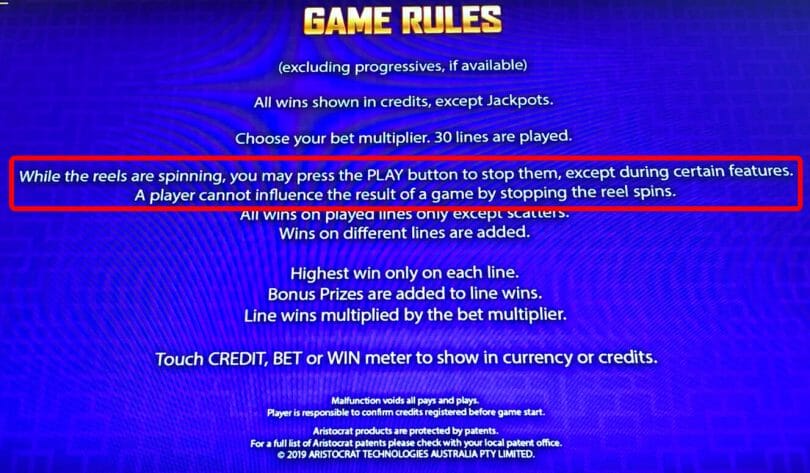 While the goal of Know Your Slots is to share accurate information about how slots work, some people simply don’t want to believe it.

Recently I got a comment about one of my earliest Myth vs. Reality posts, where I confirm that stopping the reels has no impact on the outcome of a spin. The commenter was very brief, saying my article was “complete BS.”

This is one of those fallacies that many people want to believe – they have control over the slot because they’re hitting the button. “I stopped the spin on a bonus so I was responsible for that” is probably one of the statements I heard most often even before starting my site, that I knew simply wasn’t true.

How did I know this? Slot games are built based on math. A set number of outcomes can occur on a game, designed mathematically in a way that over a period of time they will make money for a casino.

There’ll be ups and downs, but over some number of spins they’ll approach the expected outcome that they’re designed to achieve. The Random Number Generator helps ensure that any individual outcome is possible.

Slots aren’t as a rule a skill game – the games on the casino floor that are skill games clearly advertise themselves as such. And now, notices are beginning to appear in the pay tables about stopping the reels not influencing a game.

I’ve seen this most frequently so far with Aristocrat – many of their newest games reference this. But they’re not the only ones where I’ve seen this. I’ve seen examples of this on IGT and Konami games for sure, and there’s probably games where I missed it.

In the IGT example above, you can see it also talks about near misses and how they don’t impact your chances of winning or losing if you keep playing.

Does this mean earlier games that don’t have this notice in the pay table can be skill stopped? No – just because games are more explicit in their rules today doesn’t mean that something changed in game design that led to this addition. In fact, the same language is popping up where online options exist (in states where it’s legal, that is), and on older games too.

What has changed is video slots have a lot more room for pay table information, so they’re using that extra space to get increasingly more explicit about how slots work. Perhaps in the process it’ll help to finally kill a longstanding myth about slots, but unfortunately I doubt it, as the “complete BS” comment I received underscores.

Some games, designed as a prize first structure, only hits the RNG once and shows a result that matches the prize selected by the RNG at the time you hit spin.

Hitting the spin button a second time simply accelerates displaying the outcome of a spin – it already knows where it’s going to stop by the time you stop the reels.