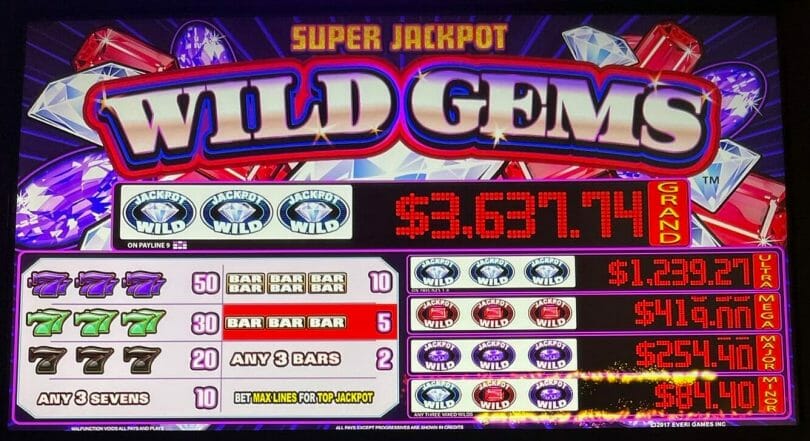 Everi’s Super Jackpot series of games is among their three-reel mechanical reel offerings that have been quite popular over the years. Their Wild Gems version pulled me in recently, and for the first time (despite a number of attempts before), I finally got a pair of progressive wins, which reminded me I never really wrote about them.

Each theme has its own twist; the Double Lion version for instance uses a double wild multiplier to boost pays. On Wild Gems, certain symbols have multipliers of 2-5x on them, and getting those multiplier symbols in a line hit will multiply the pay table.

As such, while the pay table above can look a bit anemic on the surface, those multipliers can bring the pays up quickly. The fact that there’s also three different wild types on the reels, three different bar types and three different 7s opens up the potential for a lot of mixed symbol pays as well; this can bring down the overall volatility of a game.

The games are 9-line games but only one credit per line required, so that yields a pretty low $2.25 bet on quarter denomination, for instance.

There are five progressives available, with mixed wilds being the entry level progressive and paying a solid 30x+ starting point for the progressive compared to the max bet of $2.25, it’s one of those pays that’s good enough to keep you in the hunt. Combined with the line pays, you can rack them up quickly.

In my case, I got two progressives in pretty short order, along with some other line hits, that put me well into profit territory in short order. These games can be a bit of a wild ride but those progressives really help flesh out the game as there’s no other bonuses or features to speak of.

The games are super easy to understand, with their pay tables right up front, which can make them great for people newer to slots, and their structure and bet level, particularly on quarters, can be a good entry point for those who want to dabble with higher denomination slots but don’t want something too expensive to start.

I’ve been seeking these out a bit more and I’ve found them quite fun to play. Aside from the Super Jackpot series, Everi makes other variations of games like these that are worth checking out. Each has its own twist, and some will be more volatile than others given the multipliers, progressives and other things in play, but they’re a fun setup regardless of choice.

RandomSlot features the game in this video:

Akafuji Slot plays both the Wild Gems and Double Lion variations in this video (the version shown in this video is a Class II Bingo Machine):