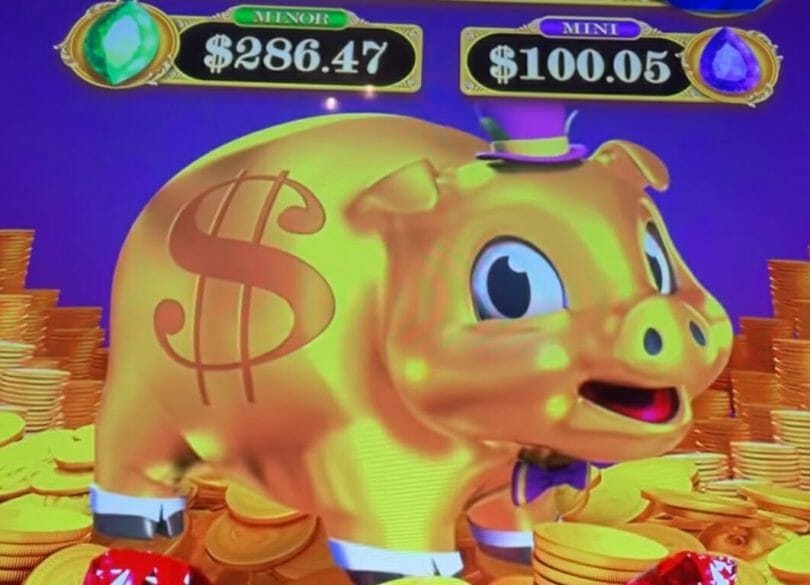 I’ve previously talked about Rakin’ Bacon, a volatile AGS game (aren’t they all) that was popular enough to get a round of sequels under the Rakin’ Bacon Deluxe heading.

TheBigPayback has had some great runs on this game series, but this video probably takes the cake. The first bonus he got was pretty interesting in its own right, but it really gets going around 3:15, when he triggers a second bonus at a $5.28 bet.

This free game bonus round was remarkable for the number of retriggers, something special announcements and reel row unlocks that occurred. This was one of the most active versions of this bonus I’ve seen, yielding a respectable 334x bonus for Tim at TheBigPayback, but also showing the game’s true potential.

You can see that it’s a tougher bonus than the original, which gave a volatility choice, as you get 8 spins to try to get retriggers and/or unlock rows and/or get big wins. It’s not an easy task (and is a mere half the spin count of the 15 spins you’d get if you chose that reel height on the original).

But if you can get some rows unlocked and some retriggers, it really opens the doors to some consistently big line hits. That certainly fits the definition of a more volatile bonus – the potential’s there, but the right things have to happen to really pay out.

For TheBigPayback, the end result was a jackpot handpay on a notoriously difficult game series, and for us, it’s a good 10 minute ride to see how this game’s pays can be accomplished.