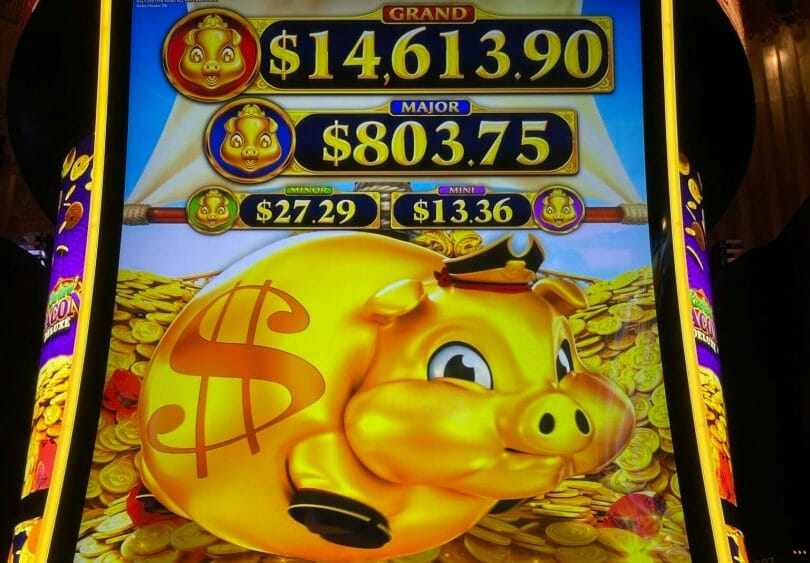 Rakin’ Bacon has a definite fan base, despite it being a clone of other games in the AGS library, and the fact that it was a standout hit means that a sequel was coming.

You’ve still got four progressives with an 88 credit increment and all ways pays action. But each aspect of the game has been tweaked a bit.

The progressive pick (which like many games in this format can come out when any wild appears on the reels) now comes with the ability to boost progressives. This has become a more popular feature as of late, such as on Ta-Da Panda, so it’s not surprising to see it here. Of course, there’s no guarantee the progressive(s) that get boosted is the one you win, so it’s an added bonus when it happens.

There are two themes this time around – Pirate Plunder (which I primarily played) and Golden Blessings. The free spins differ a touch, but the idea is the same.

On Pirate Plunder, arrows appear, which grow that reel by one space, which given it’s an all ways pays game is helpful. On Golden Blessings, you collect red tokens and as you get enough of them (2 for the first level, 3 more for the second, etc.), you unlock an additional row for all the reels, boosting the ways to pay.

If you unlock enough of the additional reel space you get additional free games, but you also have the ability to retrigger when two or more bonus symbols appear on adjacent reels starting from the left. And of course more symbols give you more spins and a bigger pay.

I felt like these games have a propensity to bonus more, which I think helps a bit – the original was almost a bit too tough. But I got multiple bonuses on multiple sessions, although the bonuses didn’t always deliver. But given the scenario set up here, similar to Buffalo Gold, you’re rooting for retriggers and symbols to, in this case, expand the reels.

I saw someone on a lower bet doing exceptionally well on a $3.52 bet and a couple thousand dollars because every spin was a big win given the very tall reel set they had collected, and had got enough retriggers to have plenty of spins to deliver on those tall reels. When every spin is doing an anticipation spin indicating something big coming, you know you’ve done well.

It’s still a volatile game, with a hit frequency of 28.8% for both themes, which means you’ll win something just over a quarter of your spins, but some of those line pays can be pretty amazing too!

TheBigPayback had exceptional luck on Rakin’ Bacon Deluxe in this jackpot handpay video:

Slotaholic did one of his 100 Spins sessions on the Pirate Plunder theme and had a great outcome on a free spins bonus:

KURI Slot had some good sessions on the game as well: