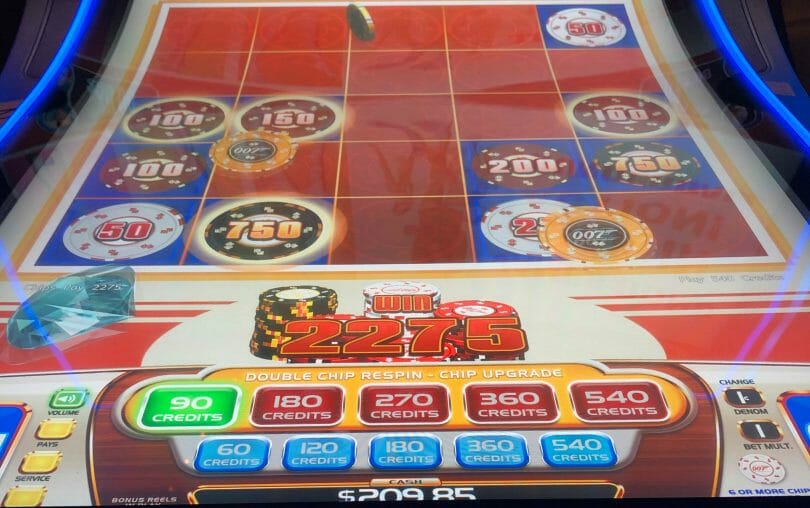 It’s not often I get into a licensed game. I find many of them to be designed in ways that make them less than fun, and each major manufacturer tends to get something wrong on their modern licensed properties.

Aristocrat tends to have meager pays be the order of the day for line hits, on games like Britney or the B-52s. Bally’s pay model tends to not work out well when they’re handed properties like Monopoly (so I was glad to see recent games in that line seemingly be handed back to the WMS team). WMS tends to load them up with more/better bets that underwhelm more often than not (although sometimes, like their three-reel Price is Right, they build a fun game that works).

All three of these tend to push up the bet, which is common in licensed games but makes them harder to devote any meaningful play.

I probably have the least concerns with IGT right now, as they don’t always go high with their minimum bets (Jurassic Park at 40 cents, the new Price is Right at 50 cents). But I’m going to circle back to WMS for this review, as they, along with sister company Bally, put together a set of James Bond/007 slots that each bring something from their companies to the table.

But it’s the WMS-styled Thunderball that I’ve found myself enjoying for well over a year now. The game lifts some time-tested aspects of WMS’ licensed games, while adding in some new wrinkles that work well.

Thunderball, along with sister games Casino Royale and Live and Let Die (the latter of which shares a lot in common with Thunderball as it effectively used it as a blueprint), feature a chip bonus that evokes a bit of a Link game bonus – collect six chips to get paid them, but first you’ll get to respin to try to collect more.

If you have the more/better bet active, you get a second respin, as well as the ability to upgrade chips. Then the white/red chips reveal credit amounts, the black chips have a mini wheel that spins for credits, free spins or a gold chip, and the gold chips go right to a wheel bonus.

As someone not fond of the Link games, I like the chip bonus because not only does it resolve more quickly, but it seems to come with enough frequency to make it fun.

The Free Spins bonus can be earned on a base spin, the chip bonus or the wheel bonus, which is great because it shakes things up and allows you to win them in a variety of ways. The free spin bonus works like many of the recent licensed WMS bonuses, like Flintstones, where certain spins can get enhanced. This includes:

When all of the above work together the pays can be great – the above was a 100x hit on one spin of the free spins bonus.

For each gold chip you secure during the chip bonus, you get a spin of the watch wheel. Each spin, the wedges reveal themselves, which include credit prizes, jackpot wedges and free spin wedges. The jackpot and free spin wedges can sometimes be increased in size before the wheel spins. If you land free spins, you’ll see the same free spin bonus as above (and can collect all the spins together from the wheel bonus before proceeding).

Two flat jackpots based on your denomination, and two progressive jackpots are available in the predetermined jackpot bonus. Like most of this type, you pick until you reveal three of a given symbol. On a 90 cent bet the smallest jackpot is $25, so they’re pretty generous relative to a $10 mini on other games at penny denomination.

With Live and Let Die being similar, but I have never encountered it, I presume I’d like it similarly, but I enjoy this version vastly over the Casino Royale version in the same cabinet. The free spin bonus is replaced with one requiring picking that gives you a chance to unlock three reel sets and multipliers, but in practice proves to be a lot tougher unless you pick well.

The wheel bonus in that version is replaced with a bonus where a series of playing cards shows up until one is shot, and that’s what you win. Both of these fall a bit more flat to me; they’re not as fun relative to the wheel and the random upgrading of the reels. So Thunderball gets my vote.

Slotlady had a great run on Thunderball: