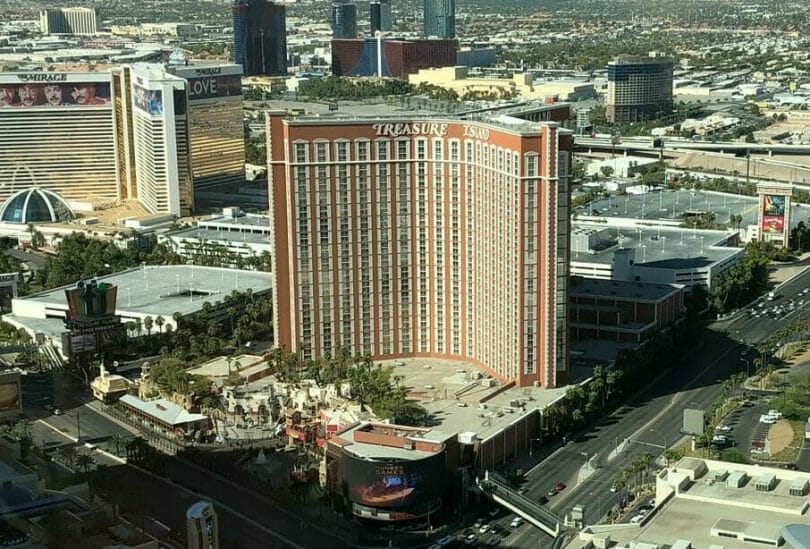 Opening in 1993 as a sister property to Mirage, Treasure Island Las Vegas featured a prominent pirate theme, complete with ships and show out front. But while the pirate theme has been heavily diminished and the property now owned independently for over a decade, it still has quite a bit going for it.

Let’s take a look at this property and how it fares.

This is a property with in my mind a somewhat confusing casino floor that seems smaller at first until you realize there’s slots in all sorts of weird nooks and crannies. This isn’t a big square layout; the casino is sort of a triangle with the player’s club desk and other things in the middle.

There’s a decent mix of old and new slots, pretty standard for Vegas properties with a history as lengthy as Treasure Island, but well balanced for players who like a bit of everything.

Table games have above average rules and decent minimums from my recollection of my visits there. You’ll usually get a better deal than visiting many of the chain-owned properties.

The same goes with Video Poker, although VPfree2 has indicated a slow progression of removal of the best pay tables over the past year or two, although there’s still games that will outpay the chains.

My two sessions at Treasure Island were quite strong, and I’ve had decent gambling experiences here – my sense is that their payback likely outpaces that of the chains, based on how they run their floor, and as I’ve shared previously, more generous Video Poker and table gaming conditions usually indicate a more generous slot floor as well.

I’ve never personally stayed at Treasure Island, but they recently completed an overhaul of their rooms, taking advantage of the shutdown during COVID-19 to get through the remaining renovations. The renovations look pretty comfortable, with Sealy Posturepedic beds and 400 square feet of space to work with even in a basic room.

The building has three arms, just like Mirage, so some rooms have better views than others, so strip and panoramic views exist among the room stock, along with your expected suites and so forth. Rooms include mini-fridges and safes among other modern amenities.

The TI Players Club is an independent program that looks a lot like what Mlife used to look like a long time ago. You earn a point per $1.50 on slots and $4.50 on (most) Video Poker (a few are $15 a point). Points can be redeemed for free play or comps.

There is also the Treasure Chest points, which works similar to the Great Gift Wrap Up, where you can accumulate points throughout the year for prizes.

Players I know who enjoy staying at Treasure Island say the comps are generous, which would make sense given the casino has to compete with some pretty big chains. I’ve received the ability to get no-stay slot play for playing a minimal amount of coin-in, and I’ve also received extras on the kiosk game for achieving certain numbers of points.

The biggest downside is that it’s isolated to one casino (it’s still uncertain whether the program will be combined with Circus Circus, which the same owner now owns), but being Vegas it’s not hard to find other places to play when you want a change of scenery.

There’s a CVS right on site, which is quite handy if you want to pick up some quick items. Gilley’s and Senor Frogs are the key entertainment and dining establishments, along with the Cirque du Soleil show Mystere, which is the first permanent Cirque show on the strip, and of course the longest running.

The Marvel Avengers S.T.A.T.I.O.N. is also on site, offering a family-friendly exhibit for those looking for something a bit different to do.