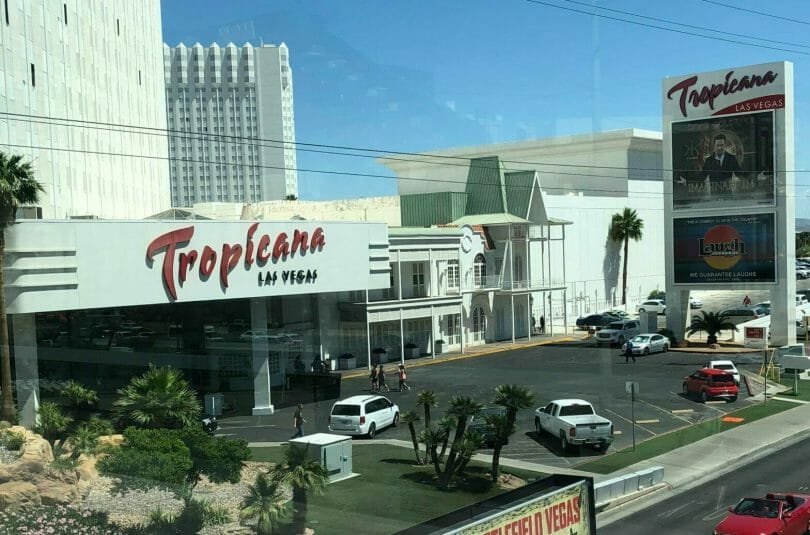 The South Beath theme the property has was reinforced in renovations over the past decade, and some unique architectural features are among the things that make the property special.

Tropicana’s casino floor is certainly not the largest (it features only about 650 slot machines), but it’s certainly capable enough, with slots, table games and video poker. There are slot machines that haven’t moved on the floor in five years, and some are much older than that, but there are also new machines. It’s an interesting mix, more diverse than the average strip casino today.

There’s a high limit for higher limit players, but the bulk of the game are lower denom and/or lower limit games. The Video Poker isn’t anything to write home about, with the best pay tables at $1 denomination and above, and overall a step below many downtown casinos.

The table games section is compact, but has some variety and features all the core games players will traditionally seek.

One of the more remarkable features of the property, and found on the casino floor, is a stained glass ceiling, installed more than 40 years ago, that was at risk during a proposed renovation a few years ago but was cancelled, keeping the ceiling safe from being removed/destroyed for now.

However, as of the summer of 2022, the operations of the property are in the process of being sold (the third such time in the last decade), and each time it’s been sold there has come pronouncements of big changes (although most of the changes in recent years have been renovations of existing aspects of the property).

Bally’s, who is slated to take over the property, has spoken publicly about the possibility of a much larger shake-up than some basic renovations, so we’ll have to see what happens.

Tropicana’s two towers contain nearly 1,500 rooms, and are well themed to match the South Beach vibe found elsewhere on the property. Rooms start at 375 square feet and are set up to be comfortable and spacious, as well as affordable, while having the amenities people expect from a Vegas room.

Being an older property, room rates tend to fall at the lower end of the spectrum, but the quality of what you get is still quite good for the price.

I stayed at Tropicana for the first time during my July 2022 trip. While dated in some respects, the room still felt in pretty good shape, and felt pretty roomy given the furniture found inside it. Friends I spoke to said they put me in the better tower, so it’s quite possible there are rooms in worse shape, but my experience overall was positive.

As soon as Bally’s completed their acquisition of Tropicana, they immediately replaced mychoice with… well, not the Bally’s card program, but one that has cards that looks like Bally’s, but is its own program that also coincidentally is structured exactly like mychoice.

The idea seems to be to have it sit on its own for now while they figure out the future of the property, but it means you are no longer linked to any multi-casino program, and your earnings stay at the property. I presume in part this also gives the IT team time to do a proper conversion.

The tier year runs from the day of purchase through 12/31/23, so my guess is it’ll be a while before the property is officially ported to the full Bally’s program.

They sometimes have a very generous card sign-up program. At the time I signed up, I was given a loss rebate program that was 50% instant, and 50% return within a year. As it happened, I traveled to Vegas the first couple of years for a work conference, and the conference was one week earlier in year two, so I was able to claim my second half three days before it expired.

That was a more generous offer than they’re doing now, but their new player programs have traditionally been more generous than most of the other strip properties, and is a good getting to know you sort of structure.

They have a few shows, like Legends in Concert, and a few food options, like a food court and a Robert Irvine-backed restaurant. I had a meal at Irvine’s Public House and the food, and service, was perfect for a resort like this – accessible and friendly.

Tropicana is surrounded at the corner it sits by multiple Mlife casinos, including MGM Grand, New York-New York, and Excalibur; it also has one of my favorite value casinos, Oyo, on its other side.

You can book rooms at the Tropicana Las Vegas through vegas.com, which offers a Best Price Guarantee. If you find a lower price while booking or within 24 hours, contact them and they’ll match it! Vegas.com routinely runs promotions on hotel rooms as well, making them a good place to check.

Here’s Pompsie‘s review of the property:

Here is a walkthrough of the Tropicana from Walking Las Vegas: