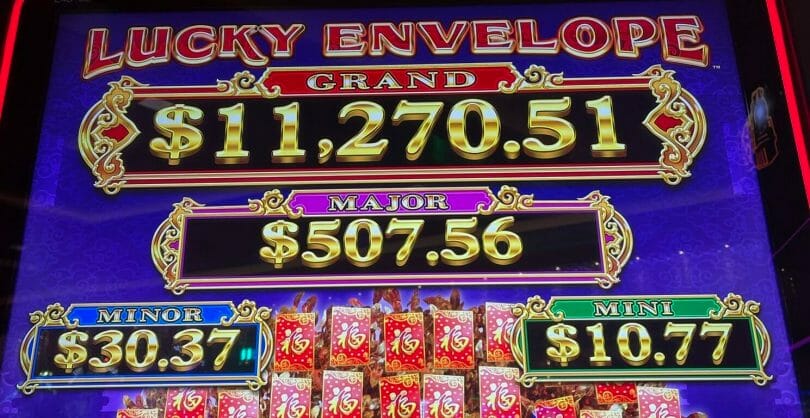 Lucky Envelope is another one of those games I first got to check out during G2E with Konami, and recently got to play live on a casino floor for the first time.

On the surface, Lucky Envelope is a variation on the Wild Wild games by Aristocrat, but they do throw in a few new twists.

First off, the game follows the lead of other Asian-themed games with an 88 credit bet increment. The bet options here match games like Dancing Drums and 88 Fortunes, which will be a comfortable array for many.

The second difference is when the wild wild drops, any cash on reels prize that appears is awarded; it doesn’t have to be on consecutive reels.

Three free games symbols on reels 3, 4 and 5 trigger free spins. You have an increase chance of winning those cash on reels prizes during the bonus. But here’s another thing that differs: The Lucky Envelope series has two themes.

Jade Wealth has a multiplier mechanic just like the Wild Wild series, where x2 and x3 wilds are on the reels. You still need two wilds to collect the prizes. However, the other theme, Plum Riches, only requires one wild symbol on the first reel, and the other four reels then house cash on reels prizes. In that way Jade Wealth is the more volatile option, but you can choose the theme that has the style you prefer.

Overall I found the credit prizes to be a bit more forthcoming, likely aided by some of the additional credits required to play. But overall I had a lot of fun playing these games!

Here is a video from Konami featuring the game from G2E:

The Slot Cats showcased the two games in a video:

TheBigPayback also featured both versions and showcased all the features: