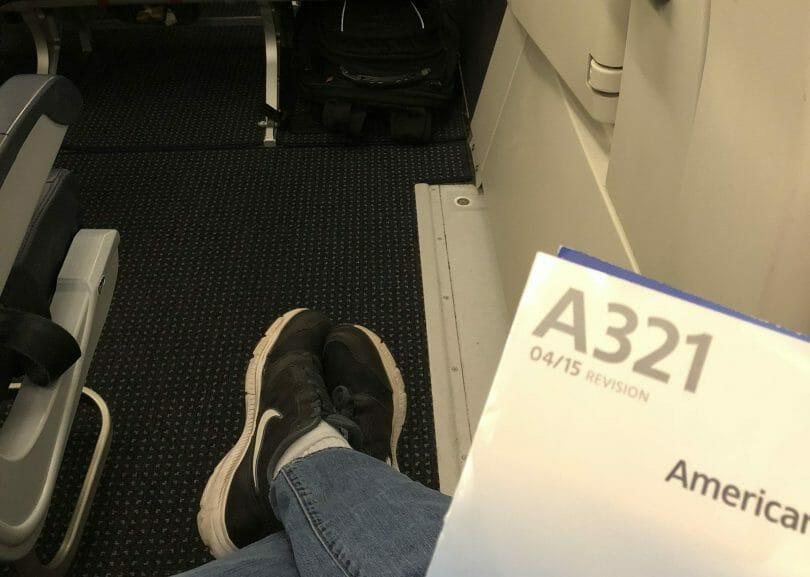 I know that this site is primarily about slots, comps and advantage play, but as this is the effort of a single person, it’s inevitable some personal experience comes into play. And today I want to share a not-so-secret thing about some of my recent flights that, as it turns out, some frequent travelers I know also adore: Seat 23F.

Not just any Seat 23F, of course. Last year I flew on an Airbus plane with American Airlines for the first time, and it happened to be an Airbus A321 they inherited after their merger with US Air. The unusual thing about this plane is there’s a few rows near exit windows where one seat is missing. If you sit in the seat directly behind it, you end up with some extra legroom.

Now, I’m 6’3″, so that matters. And since it’s not counted as a Main Row Extra or Exit Row seat, the fee for the seat also tends to be on the low side. I bought an exit row seat on this plane two years ago for my longer leg and the flight attendant allowed me to move to 23F because I was the only one who paid for a seat in the section. It was hands down the best flight I had in years because I wasn’t so boxed in.

My flight home got rescheduled because a connection was cancelled, and in its place I was booked on two more A321 planes, both with 23F available. I booked both of them. Earlier this year, I booked 23F for my main leg out and back. And for my most recent trip to Las Vegas, one of my legs had the amazing 23F (I gave up the opportunity to have it on the way back because I got an itinerary that didn’t require a red-eye or a really early morning).

One thing to understand about the plane is while there are a few seats that look like they have this arrangement, there’s more than meets the eye. A quick look at Seat Guru shows a few versions of the plane; the one I’ve always encountered is this version.

There are a couple of other seats, like 32A, which seem similar, but on the opposite end is a flight attendant seat. So you’re sharing that legroom and space with them. It’s not really an empty space, it has another seat that’s simply facing the other direction.

The best part about 23F is it’s not considered an exit row seat or Main Cabin Extra, just a Preferred seat, so you pay less to select it. I have paid something like $28 or so each time I’ve had it available for a five hour or so flight – that’s a bargain for the comfort it provides. Each flight I’ve booked that had this plane, this seat has been consistently available.

Meanwhile, the other seats around it are rarely purchased either; sometimes flight attendants will let people upgrade to it, or assign people to the rows the day of; I rarely see them filled up in advance. So you also have an above average chance of little to no crowding around you to your left.

While the plane itself is old, so no amenities like in-flight entertainment or power plugs, it certainly gets the job done. And two rows up you still have a seat back to stow your personal item.

For those who fly cross country and particularly American Airlines, this is worth looking out for. It offers an affordable way to get the leg room you want and I have found it transformative in making my trips to Las Vegas more comfortable.