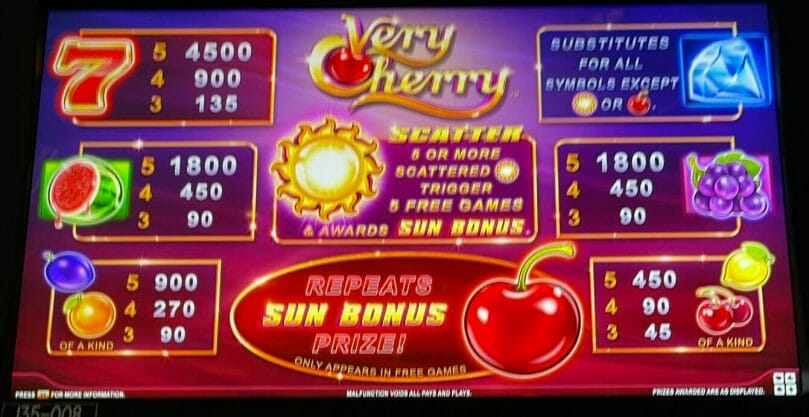 Very Cherry is an interesting title by the Shuffle Master division of Light and Wonder, formerly Scientific Games, in that depending on where you see the game, it appears to take a somewhat different shape.

The core of the game is pretty similar – there’s only 7 base pay table symbols, plus the wild and the sun symbol. On all versions of the game the bonus symbol is a sun with credits on it, in which you need 5 suns to trigger a 5 spin free spins bonus. During each free spin, the total sum of the suns is awarded for each single cherry symbol that appears. Suns appear during the bonus and can effectively retrigger a new bonus round with that set of suns’ value awarded instead. This bonus and its structure is the same across all the versions.

However, the Vegas-style Class III slot has additional features that don’t appear on non-Class III versions, like the one I found at Empire City Casino, which uses a video scratch-off type model.

In return for those changes, the pay tables on the Empire City version are more generous, and you seem to be able to get a lot more good line hits. It goes to show what happens when games with multiple features have to spread the pays out more thinly.

The sun can house a Mini jackpot as one of its values, but most of the jackpots are available in a second feature that is awarded when three or more reels full of 7s land. The more reels, the bigger the potential prizes, which include any of the four jackpots, a credit prize that can range from 10 to 200x the total bet, or Diamond free games with the Mini, Minor or anywhere between 5 and 50x serving as the sun prize.

As a result, the games feel quite different. I have no doubt this isn’t the only game that was adapted when it shifted to a different type of gaming machine, but this was by far the most different with the same name I’ve encountered so far. Despite the same name and logo, and a common symbol arrangement and core free games round, the two games are actually quite different in practice. Below you’ll see videos from both types of games to see what I mean.

RandomSlots has a video featuring the Vegas-style slots version and its pay tables:

TheBigPayback has had some great luck on Very Cherry on the Vegas-style slots model. Here’s one of them:

God of Jackpots has a video on the version I found at Empire City Casino:

This is taken from a different state (Illinois), but with the same structure/pay table as found at Empire City Casino. However, it appears this video game from a Video Gaming Terminal where it operates with an RNG, making it more in line with a Vegas-style slot, but with other limitations (like upper payout limits) that may have necessitated the use of a different version without the progressives.