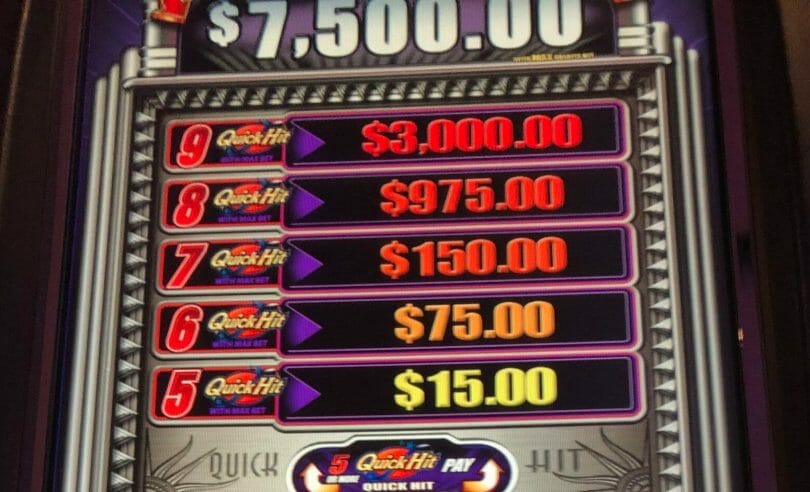 In certain markets, especially Las Vegas and Atlantic City, you will find in many casinos certain slot machines where what would normally be a progressive is fixed. A reader recently asked me who would be responsible for this.

The answer is it’s a decision made by the casinos, and generally to reduce the payback a bit.

If you talk to slot machine game designers, they don’t really like this idea. The game is designed with progressives for a reason, including the excitement of progressives as they continue to grow, driving player interest. They also put some percentage of the game’s overall payback towards it.

When a game’s progressives are fixed, players lose out on the incremental payback that’s included in the meter running, with the profit running right back to the casinos.

Some games are designed with progressives to encourage bets. Quick Hit games reward max betters with a higher payout for collecting enough Quick Hit games. Fix the progressives, like in the pictured example, and a player no longer has an additional incentive to max bet on that game.

There’s a bit of a give and take sometimes between game designers and the casinos. Game designers may attempt not to allow casinos to fix the progressives when they can, making other adjustments to address why casinos were doing this to begin with.

There are circumstances where a slot’s designed with a progressive that caps out (think the Major on Lightning Link). That’s done on purpose, and the money that would have kept growing is added to the next major. So it’s not lost, it’s just spread out among multiple Major winners.

By contrast, fixed progressives only serve to hurt the player. And given there are many times other games within the same casino where the progressives aren’t fixed, or perhaps the casino next door in the bigger markets, it’s generally a good idea to avoid them when you can.