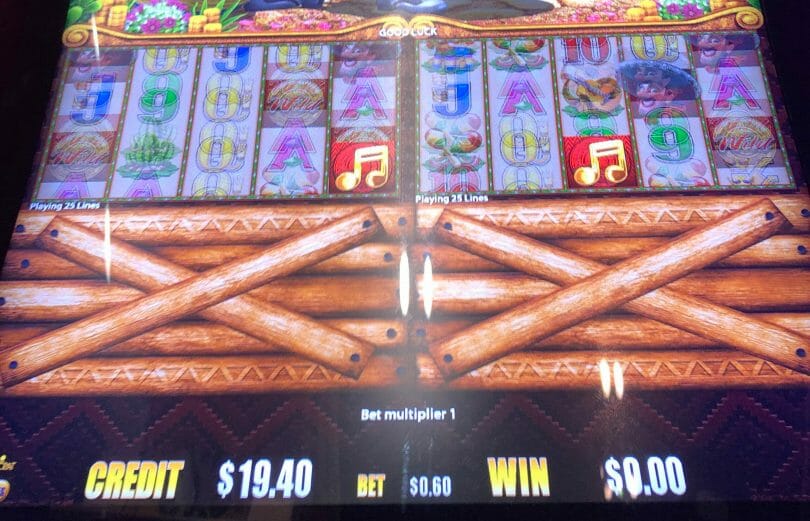 Aristocrat’s Wild Fiesta Coins is part of a line of Extra Bonus Wilds games (in this case Extra Extra Bonus Wilds) that features the ability to collect more wilds. This one is themed to a Mexican style, with the character dressed like a Mariachi musician, and he’s got a donkey friend to accompany him.

In this version, the guy can do his normal thing of throwing coins, falling into the pot and pulling out a bag of coins, or playing his instrument, which causes a musical note to land, which will cause more wilds to appear.

What separates this version is the ability for multiple sets of reels to appear; the donkey will come down and kick open 1-3 more reel sets, meaning a chance of up to 4 sets. Then the mariachi character can add wilds just like on a single reel version.

With all this in mind, you’re playing 25 lines, but wagering 60 credit increments, so the feature weighs in heavily here in being able to get pays.

You can retrigger within the free games bonus, and the Extra Extra Bonus Wilds feature comes more regularly during the free games.

Here is Randomslots‘ video with the pay tables and an Extra Extra Bonus Wilds feature being triggered:

During Slot Queen‘s last visit to Atlantic City she filmed while I was with her and I got a great bonus round. The bonus starts at 8:46: