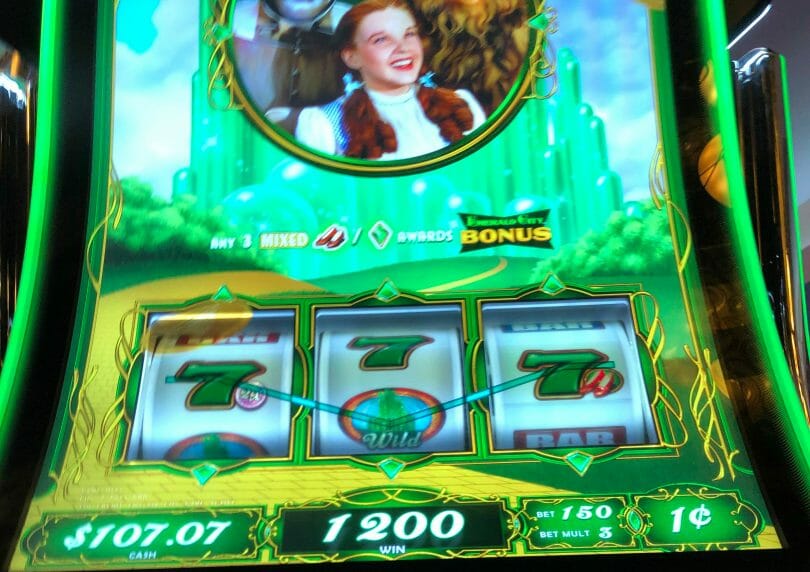 Scientific Games has been playing catch-up in the past few years on renewing classic games on modern equipment. Fortunately, though, these efforts have led to a proliferation of both classic games coming back, and some brand new sequels that evoke previous games.

The Wizard of Oz line has been a proven performer for WMS and now Scientific Games, and with their latest Oz game Emerald City, it, like a recent three-reel Lord of the Rings, works to revive the three-reel mechanical game they had out some years ago, but with some new twists.

Like before, you can collect emerald gems to trigger a bonus, but this time around you can also collect ruby slippers. They can be mixed and trigger the bonus as well, but only if you’re playing at least 150 credits – this is the latest version of a more/better bet on a licensed machine.

The four bonuses are:

If you’re wagering at least 150 credits and collect three of a kind of emerald gems or ruby slippers, a deluxe bonus is triggered with enhanced options. Those are:

A further wrinkle is the high-limit wagers at $5 or more on a $1 denomination; which will automatically give you the Glinda the Good Witch wheel if three symbols are collected.

The new additions make the game a bit more diverse, while keeping to the active and diverse bonus game arrangement of the licensed 3-reel games that have been around and popular on casino floors for years.

It follows both in the footsteps of the recent Lord of the Rings where a second bet level exists with more chances to bonus over the original version, and the Road to Emerald City 3-reel game that was out a number of years ago with similar mechanics, albeit some different bonuses.

Here is RandomSlots with a video featuring the pay tables and a Deluxe Bonus: