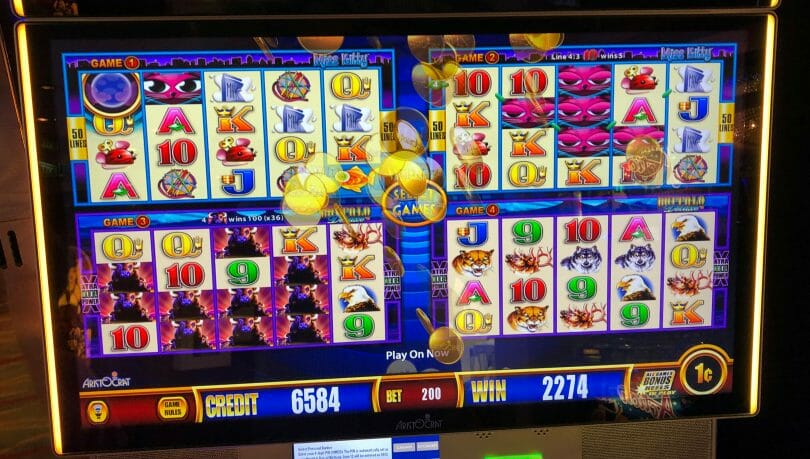 Generally speaking, Aristocrat makes pretty volatile games One of their most popular game types is the Wonder 4 Series, which takes many of their popular games and arranges them with four reel sets on the same screen, with many times your choice of picking between a few game choices.

This has the interesting effect, if playing all four of the same game, of offering a different volatility option than, say, a 4x bet on a single set of reels of the same game. In this post I’ll look at the difference between the two, and how to make a decision on what to play.

Wonder 4’s structure is such that four slot games appear on a single game board. On all of the modern iterations, you can choose from four different games. Many of the versions, such as Wonder 4 Tower and Wonder 4 Boost, include at least one game that’s a 25 or 30 cent per board configuration: Pompeii, Whales of Cash, Indian Dreaming, etc.

That allows a lower better to play four games for $1 a spin and have a ton of lines for that $1. Similar to games that offer more lines to reduce the volatility, you’re effectively doing the same with four games. You can bonus on one or more of the boards and you’re traditionally playing like it’s a single board bet.

For lower rollers who want to step up a bit, those $1 bets can be a lot of fun, and you can get some play on it. While you’re still playing Aristocrat games, and therefore you can get some wild swings regardless, the money is more likely to hold out with the higher line counts.

Now, some versions of Wonder 4 add progressives, super and even extreme free games, and this does restore some of the expected volatility on the bonus side. You can have very small bonuses too just because of that 25 cent bet on one game board. But overall, it helps to smooth things out a bit.

One Game at 4x: Volatility Up

By comparison, you can also hunt out the originals, which most casinos still have either in their original cabinets or in remade form on the newer ones, and get a good run.

Because the same game boards that are 25 or 30 cents each on Wonder 4 can be played as a single game of 25 or 30 cents, for that same $1 or so you can up your bet to 4x (or since some versions skip the 4x, a 3x or 5x shot) which amplifies the line pays, but you only have one set of reels to evaluate to make it happen. As such, this is the equivalent of playing less lines.

When you do make it happen, your wins will be four times (or thereabouts) larger, meaning bigger swings in either direction when you win or lose. Your overall payback over time may be the same if you play long enough, but in the short term volatility can take you up or down.

Wonder 4 is in effect a way of spreading bets across more lines, whereas betting the same on a single screen is the equivalent of less lines with a higher multiplier. The same concepts between the two approaches work for these sorts of games. Next time you’re looking for a game in the $1/spin range that might give you some mileage, certain versions of Wonder 4 may be a good option to pursue.